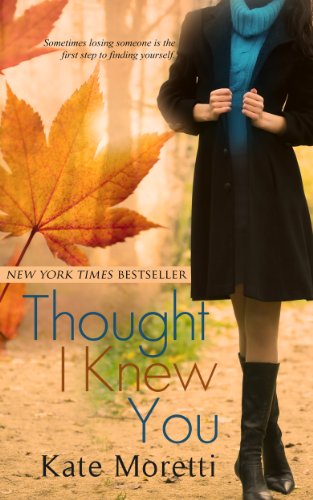 Book: Thought I Knew You by Kate Moretti

about this book: Claire Barnes thinks she has a content life – a happy (but not perfect) marriage, two little girls (ages four and one), a dog, a nice house. Then one October day, her husband, Greg goes on a business trip to Rochester, NY and doesn't come back. The very same day, their family dog runs away. The police can't find Greg and the FBI won't get involved until they have evidence he did not leave intentionally. Claire's childhood best friend, Drew, offers a shoulder to cry on and then helps play detective as they travel to Rochester to investigate. They discover that before Greg disappeared he dined with a woman and while he checked into his hotel, he never actually slept there. Claire visits Greg's Rochester office only to discover there was no business trip scheduled that week. More confused than ever, she returns emtpy handed and broken-hearted home to Clinton, NJ. Eventually Drew returns to his New York City brownstone and Claire must deal with aftermath of her husband's disappearance alone. She discovers a journal with the note "Call Karen at Omni, SD". The police discover that he lied about four of his eighteen business trips that year – they weren't scheduled with his company. One of those trips was in San Diego, California.

She tries to piece her life back together again. Christmas comes and she invites Drew back to stay. She buys the children excessive amounts of toys to fill the void. She is alternately angry and sad, then angry again. She believes her husband was having an affair with "Karen". There is an undercurrent of attraction between Claire and Drew that has been there for as long as Claire can remember, but their timing was always terrible. They have one "almost" kiss, fueled by alcohol and for all the wrong reasons. Drew gives Claire a bracelet of a gold braided rope for Christmas. Drew returns to the city.

In January, Claire digs through Greg's study, needing to understand their finances and discovers that he had over a half a million dollars in inheritence from his mother who died ten years earlier. Claire's name is on the paperwork, but she had no idea the money existed. In addition, Greg's mother was borderline abusively stingy with her money. Claire can't understand why this inheritence wouln't have infuraiated Greg or why he wouldn't have told her about it.

In March, Claire feels drawn to San Diego for closure and to say that she tried to locate her husband. Her good friend, Sarah, lives in California and happily agrees to meet her for a girls trip. Claire leaves her children with her supportive parents. The girls visit the extravagant hotel where Greg stayed (and Claire believes with his mistress) and Claire remembers finding a golf tee for the hotel's course in his pants pocket. She did not know that Greg golfed. They go on a whale watch and after they dock, Claire follows a man she believes to be Greg through the streets of San Diego, but when she confronts him, it's not him.

The girls stay in the Hard Rock Hotel and meet two men at the hotel bar. Claire hits it off with Will, one of the men, and fueled by the discovery of Greg's extravagance, ends up having a one night stand. She finds the experience empowering – she is free to be her own person in a way she never has been before.

She returns from her trip and decides to take charge of her life. She takes on tasks around the house that were previously Greg's. She tackles her finances. She takes the girls to a child psychologist to aid in their grieving. She calls Drew, who is now seeing someone.

Detective Reynolds, the detective in Claire's case, urges Claire to consider that Greg may have died. Claire tries to absorb this while outside clearing the fallen branches from a dead tree when Cody comes running across the yard. She inspects his collar and learns he has a new family now. She returns him to the address on his collar and is sad to see him go, but won't do to two little boys what was done to her kids.

June and July are hot and Claire takes the kids on her first vacation alone. While there, Leah, the youngest, hides in the family van and falls asleep under the seats. Claire calls the police. Claire calls Drew, panicked that Leah may have drowned. Drew drives out to help aid in the search and ultimately finds Leah on the jetty. Drew leaves the next day. Later when Claire calls him to thank him for coming to her aid, he tells her that he's serious about his girlfriend and he wants them to meet.

Claire decides to have a memorial service for Greg. The police will close Greg's file at the year mark as "most likely" decesased. She memorializes Greg for the wonderful father he was, and recognizes that her heart has always been shared between two men, however unfair that is.

September marked the 1 year anniversary of Greg missing. Hannah starts kindergarten. Halloween arrives, and the girls fight over costumes and trick or treat. Life resumes – a new kind of normal. Claire decides to suck it up and go to visit Drew. On this visit, she realizes the depth of her feelings for her friend. She meets his wonderful, glamorous girlfriend and sees that he's clearly in love with her. She decides for the first time to be selfless and leaves before anything can happen between them.

The holidays are coming again, and Claire cooks Thanksgiving. She goes Christmas shopping and spearheads Christmas without extravagance. She is moving on, creating a new normal for her family. Drew returns on Christmas eve and announces he has broken up with Olivia and he is in love with Claire.

Six months later, Claire and Drew are together, and happy and Claire is taking Drew to the first neighborhood barbeque. Later, they get in a fight about the house – Drew wants Claire to sell the house, he feels like a replacement husband. They compromise and agree that Drew will have a more permanent place in their current home by cleaning out Greg's old study. The kids are adapting to Greg's absence with varying degrees of difficulty.

In the summer, Sarah comes to visit and they all go to the beach for a week. Drew tells Claire he wants to marry her, but she doesn't know how that will work – Greg can't be declared deceased for another 6 years.

After they return home, Claire pursues divorce and must attend a hearing. The divorce is granted and Claire is once again, a single woman.

A few weeks later, Detective Reynolds unexpectedly visits with shocking news. They've found Greg, he is alive in a rehab facility in Canada, a victim of a mugging that left him in a persistant vegetative state for almost two years. He is now awake and remembers Claire. Claire is in shock and rides to Canada with the detective to see him. When they get there, they meet all Greg's doctor's and therapists. Greg has been in a coman for two years. He woke up six months ago, but only a week ago remembered his name or who he was or who Claire was. Claire meets her husband for the first time in two years. He remembers Hannah but not Leah.

Claire must actively play a role in Greg's therapy, supplying him with stories, and pictures. She begins to commute to Canada every weekend to aid with his healing. Once he is well enough, he will come back to New Jersey but their futures are up in the air. Claire finally tells Greg about the divorce and asks him about Karen. He remembers her last name.

Two months later, Greg comes home to stay in a rehab house in New Jersey. He is involved in the girls' lives but he is no longer married to Claire or will live with them. Drew must now learn to accept this new facet of their lives.

A year later, Claire and Drew are still together, but not married. He would like a baby of his own, but Claire can't do that to Greg. Greg wants his old life back, sees the entire ordeal as his fault. Claire calls her love for Greg "parental" and protective.

Claire has learned that you can't chose who you love.

Video: Thought I Knew You by Kate Moretti