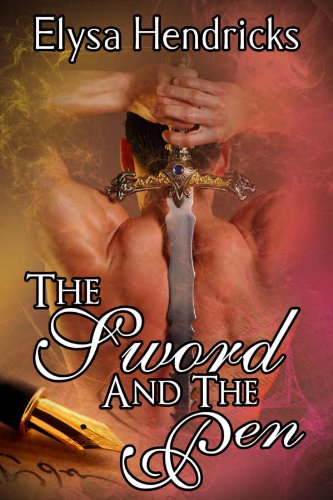 Book: The Sword And The Pen by Elysa Hendricks

about this book: What would you do if the words, characters and worlds you put on paper had a life of their own? If the characters you created in your mind came to life and invaded your "real" world?

That's what reclusive, slightly neurotic sword and sorcery author Brandon Alexander Davis has to figure out when his warrior woman character appears in his study and turns his quiet life upside down and inside out.

THE SWORD AND THE PEN is a bit Zenia The Warrior Princess meets Stranger Than Fiction, with a touch of Twilight Zone episode A World of His Own thrown in for good measure. It's a fun, romantic read that explores the concept of reality and how we choose to deal - or not deal - with it.

• "In a genre often dominated by flawless, broad-shouldered leads that seem more closely related to statues than men, Brandon is wholly and deliciously human. The characters bring a solidness to the story and by bringing them to life, Ms. Hendricks makes you believe in the impossible." — Natalie Richards

• "Seri and Brandon, the heroine and hero, become as real to the reader as they become to each other in this amazing blend of contemporary romance and medieval fantasy. Any fan of either genre will be delighted and ultimately satisfied with this lyrically told, engaging tale in which love is mighter than either the pen or the sword." — Barbara Cary

• "Serilda understands what is going on by simply believing writer Brandon is a powerful wizard; Brandon believes that one or both is crazy. Told mostly in a first person viewpoint from the lead couple, fans will enjoy this super romantic fantasy as the heroine knows the pen is mightier than the sword but the hero believes the heart is mightier than THE SWORD AND THE PEN." — Harriet Klausner

• "I really enjoyed the adventures of a writer and the woman he unwittingly summons from another dimension. It's a gloriously fun romp, with plenty of action, humor, conflict, honor, hard choices, and characters you can't help but root for." — KG McCullough