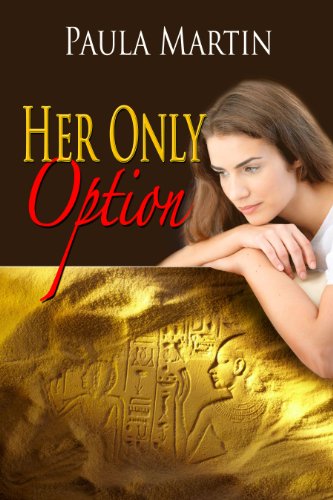 Book: Her Only Option by Paula Martin

about this book: This story was inspired by a Nile cruise I did two years ago. We sailed from Luxor to Aswan, and visited many wonderful ancient sites during the trip. One afternoon, while I was relaxing on the sundeck of our cruise ship while it was moored at Aswan, the first seed of an idea for a story came into my mind, and started to grow.

The characters came first: Neve Dalton, a heroine who was a cruise ship tour guide, and Ross McAllister, an archaeologist who was exploring a tunnel leading from the burial chamber of one of the Pharaohs in the famed Valley of the Kings. Then came the 'what ifs? What if Neve already had an Egyptian boyfriend whose family expected them to marry? What if someone was aiming to stop Ross from exploring the tunnel? And what if these two things combined to keep the them apart?

The story became more complex than I originally envisaged, and took about eight months to write. I had to research information about the tombs in the Valley of the Kings, and about the other places we had visited, not least the wonderful temples of Abu Simbel. We visited this site very early one morning, and saw the sun rise over Lake Nasser, and one of my favourite scenes in the book is when the Ross and Neve meet at Abu Simbel.

One of the joys of creating a story is when something unexpected happens. In this case, it was Wasim, the Nile boatman who sings Elvis songs. I hadn't planned him, but he appeared out of nowhere, and then demanded a bigger role in the story!

I hope readers will enjoy this 'virtual' visit to the River Nile and the wonders of both ancient and modern Egypt. One reviewer has said that it 'takes you to another world, without leaving home.'