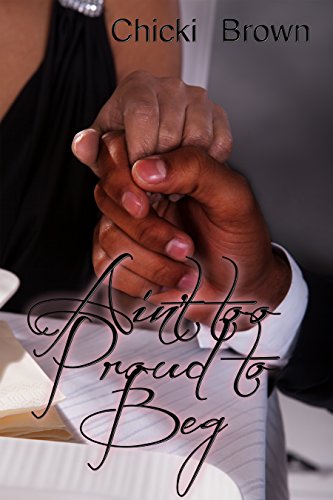 Book: Ain't Too Proud To Beg by Chicki Brown

about this book: Ain't Too Proud to Beg is the story of spoiled, self-centered actor, Vaughn Breland. Vaughn is living a life most men only dream of then everything comes to a screeching halt.

On his way to a business meeting that could change his financial future forever, he crashes his Lamborghini and ends up in the hospital with severe injuries.

The life he once knew seems to be over until he meets his physical therapist and her young daughter.

I wrote this book because Vaughn was a secondary character in two of my previous novels. Several readers contacted me asking if he would have his own story. As a supporting character, he was interesting and added a little spice to the story, but I was afraid Vaughn's personality was a bit too extreme to be a leading man. Once I began to plot the story, I knew something serious would need to happen to him in order for make him rethink his lifestyle.

Since I didn't want this to be another Hollywood story (I've already written one), I researched other locations in which the story might be set and chose Telluride, Colorado. This town has an interesting history and is well known for its celebrity residents and spectacular mountain mansions.

I had a ball researching the details on new Lamborghini's, Vaughn's medical condition, the education and training for physical therapists, details and demographics of Santa Barbara and Beverly Hills, California.