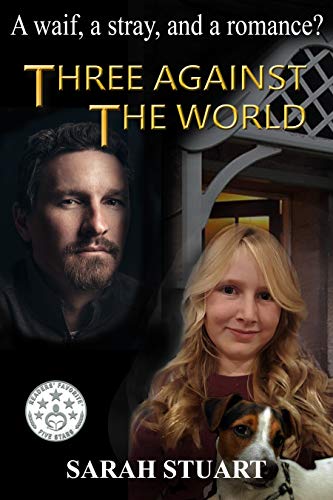 Book: Three Against the World - A Waif, a Stray, and a Romance? (Richard and Maria Book 1) by Sarah Stuart

about this book: "Auntie Sarah, Mom won't let me read your books, so can you write one she'll say is okay, please?" How was I supposed to resist a request like that, especially when my niece was willing not only to be my cover-girl Maria but act in a video too?

The result was the "queen of steam" - a reviewer's words, not mine - turning to cozy romance that, luckily, appeals to young teenagers, their moms, and grandmas. They voted in their thousands for Three Against the World: A Waif, a Stray, and a Romance? – It won Best Indie Book of 2018.

So, what's it all about? Richard, unexpectedly a single dad, Maria, dumped by Mom to make way for a rich lover, Ben, the Jack Russell terrier, and a character one reader said made Cruella de Ville look like Mother Theresa, but which one is she?

"The scenes throughout were excellently written and transported me into the world of Richard and Maria, so every one of my senses was touched. I would definitely read more from this author, especially a sequel to this book." – Readers' Favorite

"Never work with children and animals, the saying goes, but Sarah Stuart has flown in the face of this advice and produced a thoroughly enjoyable – dare I say, even spellbinding – story that revolves round the hopeless romantic Richard, his putative daughter Maria, and Ben, the Jack Russell who stole my heart." Lesley Hayes - Amazon

Other books by Sarah Stuart

Video: Three Against the World: A Waif, a Stray, and a Romance?