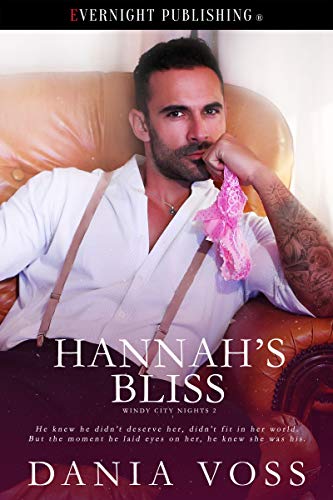 about this book: Hannah's Bliss is the newest release in my Windy City Nights steamy romance series. The series takes place in and around Chicago. It's where I live, work and play.

The hero, Rocco Moretti and the heroine, Hannah Hailey are recurring characters in the series who finally get their own happily ever after in this novel.

Rocco is an Italian, former Marine who was physically and emotionally abused as a little boy and is also an Afghan combat veteran suffering from PTSD. He's incredibly close to his younger brother and his family, and has a heart for service. Although he works hard and has a close circle of friends, he's unhappy and lonely. He doesn't believe he's worthy of love.

Hannah is a busy event planner for her mother's successful event planning firm, but has dreams of her own she's been putting off for years. She's desperate to please her mother but feels like she's failing at every turn. Hannah's been made to feel "less than" for as long as she can remember. She struggles with her self-esteem and doesn't always feel comfortable in her own skin.

Bliss is a recurring theme throughout the novel. Personal and professional bliss. Neither Hannah or Rocco are living their bliss when they first meet. They both help each other and by the end of the story, they are happier than they've ever been - together.

Rocco is an Afghan combat veteran who fought in the Battle for Sangin. It's a real battle where many soldiers, both American and British, were lost, in the fall of 2010. He fought beside another series character, Heath Jackson from another novel in the series, The Warrior's Whisper.

It's not smooth sailing for these two though. They have plenty of obstacles they have to overcome first. From emotional baggage they both carry to sassy grandmothers who like to embarrass them, to a drug dealer who nearly kills Hannah, to her overbearing mother who persistently tries to tear them apart, and more.

The handsome man on the book cover is Italian international model Luca Pantini. I "met" him as a result of an author Instagram book cover inspiration challenge. I was searching for what I imagined Rocco looked like through Hannah's eyes. I searched Google for Italian male models and when I came upon a few pictures of Luca, I knew I had found my Rocco. I put together a collage of 5 photos and submitted that as my challenge offering. It was very well received.

Only knowing Luca's name and what he looked like, I felt compelled to learn a little more about him. I located his official Facebook page and posted a little note introducing myself back in late May of 2018.

I never expected to hear from him, but I did! He told me he wanted to be on the cover of the book, even though I hadn't even started writing it yet. He hung in there while I did and helped me with the Italian translations from thousands of miles away via text messages.

He's now helping me promote the book and the series. Luca even wants to help turn the book series into a TV series. That's a tall order I know, but wouldn't that be amazing if we actually pulled it off?

Talk about living your bliss! So let me ask all of you - are you living YOUR bliss? If not, what's holding you back?