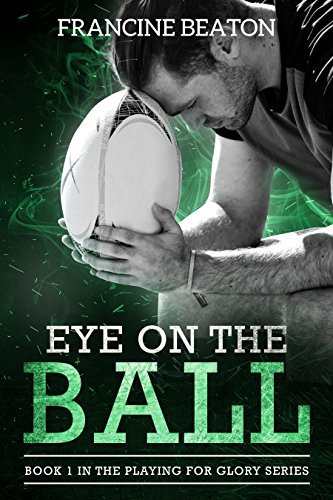 Book: Eye on the Ball (Playing for Glory Book 1) by Francine Beaton

about this book: Maybe years of following rugby and the increasing popularity of the game, had been the inspiration behind, or the reason for the series, Playing for Glory, of which Eye on the Ball is the first book to be published. It is actually fitting that Eye on the Ball had been re-released the week after the launch of the new Pro Rugby series in America and the two teams that are helping me with my research, played in the first game at Infinity Park, Denver.

Eye on the Ball is not your typical rugby romance and that is solely due to Jakes, my male interest in the book. He was the one who changed the way the series, Playing for Glory, developed. I actually wanted to write a sports romance with loads of testosterone and sensuality and everything that goes with professional athletes. It might be sensual, yes but that is where it changed. Jakes had so much more to tell than just showing off his buff body. He's quite a sensitive guy and Angie, a feisty artist from Denver, might just be the one to pull him out of his flunk.

Jakes had secrets and fears, and apart from the pledge he made to his team, that were his biggest drawbacks in preventing him from entering another relationship. Jakes had been adamant about it. He could not let his team down. He made that promise to them. His team, and rugby, were his saviours in life before. He just needed to remember that. All he needed to do was to stay away from woman. Easy – or it had been until Angie entered his life – by spilling water on his lap.

I got the idea for Eye on the Ball (which was actually first called Under the Mistletoe – if you read the book, you will know why), while watching a Six Nations Rugby Match. It was only a scene that popped up in my head, but at halftime I got up, typed the scene out (that was actually the mistletoe scene, hence the original name), and went back to watch the game.

I didn't know then that Jakes was the JJ du Plessis I had slotted in my original team. When I planned the series, Jakes had only been a number in the team. I had his initials, his surname, his position in the team and I even knew how he looked like but that was all. Anyway, I left the scene on my computer, as I was busy writing Making the Right Call but in the back of my mind, Jakes kept on popping up. He really bothered me, because I didn't know what he planned or where he was going.

It was only a couple of weeks later that I heard over the news of the death of an Australian rugby player. I followed the talk shows and in one of the shows one of the pundits mentioned that men in macho environments, of which rugby is one, are reluctant to speak about their feelings, their fears, etc. They didn't want to appear weak. That phrase immediately reminded me of Jakes.

I must tell you, I'm not a planner. I'm a pantser. I sit down and I write and the characters lead me. That was what happened with Jakes. I thought he was going to New York. No, he wanted to go do Denver. I thought he was going to stay in the USA. No, he wanted to go back to South Africa. He led me a merry dance, I can tell you. My first draft I wrote in less than two weeks. Many re-writes had followed and just as many edits. It took me a year but it was worth it.

Eye on the Ball is not only for people who like sports romances. It is a romance, yes. That's what I write. It is also not only for people who knows about rugby. I don't think you need to know too much about the game to be able to read my books. I think if you like strong, yet sensitive characters, you would like Eye on the Ball. I would like my readers that there is hope. There is second chances. Sometimes you have to work for it, but ultimately, that is up to you.