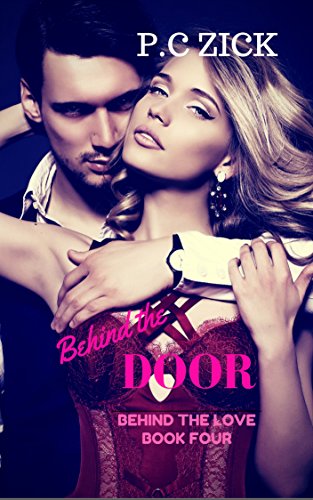 Book: Behind the Door (Behind the Love Book 4) by P.C. Zick

about this book: A VOLUPTUOUS WOMAN UNLUCKY IN LOVE. A WOUNDED PSYCHOLOGIST ON A MISSION. AN UNDENIABLE ATTRACTION WITH AN ETHICAL DILEMMA.

Sally Jean Compton is in love. And this time it's with a man who isn't in love with someone else. Dr. Brett Gorman arrives in Victory to help the veterans of Deer River with PTSD symptoms. When tragedy strikes, neither Sally Jean nor Brett are prepared for what happens next.

The shocking aftermath of the terror of PTSD untreated leaves the entire town of Victory reeling. But none are more affected than Sally Jean and Brett who must deal with their own pasts and the trauma left behind.

When Sally Jean seeks out the expertise of Dr. Brett, the psychologist of the river folks, they discover an intense attraction that leads them both to learn about themselves.

But before anything happens, Sally Jean must learn she deserves to be loved, and Brett must forgive himself for the death of his friend and his sister, his wife. It's a rocky journey to love.

Behind the Door is the fourth novel in the Behind the Love contemporary romance series that features sizzling attractions, dramatic confrontations, and intertwined and complicated lives. Set in the fictional small town of Victory, Florida, friends fight and love and form families of their own choosing.

Readers responded and asked for one of the characters--the misunderstood buxom blonde Sally Jean--to star in her own book. I hesitated. I'd never intended to ever write a series so the idea of writing a fourth novel for Behind the Love startled me. Did I have enough to say in a fourth book? Hadn't I already explored as much as I could with the previous three books? What more could I add to the dysfunctional family pool?

I went back and reread the first three books, and that's when inspiration hit.

I did have a fourth book to write. Sally Jean needed her own voice. I searched the first three books for mentions of her. I had plenty of material to begin. Sally Jean's dilemmas all stemmed from somewhere, so I wrote her into a three-dimensional character who learns in Behind the Door that everyone deserves love.