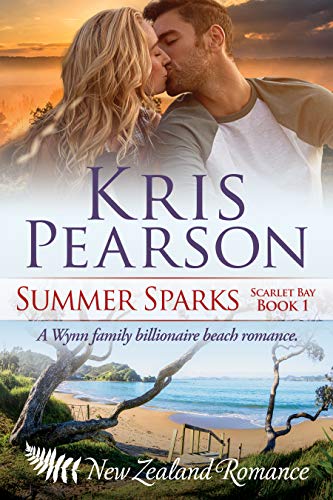 about this book: Starting to write a new series of books is always exciting. I have three series out now – my Wellington books, which are all standalones set in the capital city of New Zealand… my Heartlands trio based in some of our beautiful rural areas… and the Sheikhs of Al Sounam – two selling well, and the third started.

However, I'm finding the current situation in the Middle East is making it difficult to write another passionate, light-hearted romance set there, so I've put my third sheikh on 'hold' for the meantime. Instead, I've decided that because the Wellington books are the best sellers, I'd create a series that links through to them and sometimes gives more of a glimpse into what some of those characters are doing now.

Drum roll please – we're going to Scarlet Bay! Scarlet Bay doesn't quite exist. It's a combination of several lovely beaches where I've had holidays over the years. Authors have to remember when they set books in smaller communities they can't just steal the Chief of Police or the campground owner or other local identities. It's far safer and more polite to start by creating your own fictional community – hence Scarlet Bay. Because it doesn't quite exist, I can have anything I like happen there.

SUMMER SPARKS is Anna and Jason's story. Anna is the oldest daughter – the control freak, the perfectionist. This is because she's hiding a huge secret. Being such an organised girl, it's Anna who volunteers to sort out many years of belongings in the family's old beach cottage before the others arrive for their Christmas holiday. (We have Christmas in summer here, remember.)

The belongings need to be sorted because once the holiday is over the old place will be demolished and replaced with something new and amazing. Two builders are fighting for the job; Jason Jones and Trevor his father. There's no love lost between these two. Jason wants to break free and go his own way. Trev knows that without his accomplished son he's a dying force.

When you're six foot four and popping with muscles it takes a bit to hold you down, but maybe pretty Anna Wynn will be able to demolish him with her classy manners and cool detachment? Is she totally out of reach? These two certainly get off to a really bad start, and I had a lot of fun creating their romance.

Jason is an accomplished bird photographer with his first exhibition due to open very soon. Do you reckon he'll manage to persuade Anna out of her clothes so he can line her up in his lens as well?