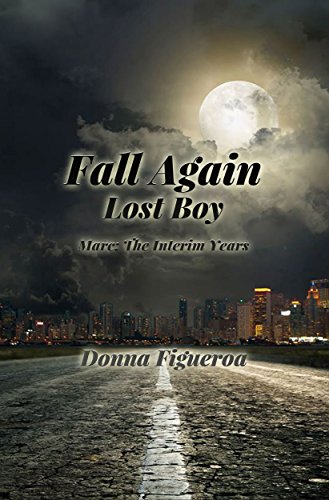 about this book: Fall Again: Lost Boy Marc the Interim Years is the second installment of the Fall Again contemporary romance series.

In the first installment, Beginnings: An Unrealized Romance, you'll meet professional actors Marc & Lauren, and their closest friends, (many who are also working artists),in the optimistic New York City of the late 1980's.

Marc Guiro is from Montreal Canada, and is pursuing acting against the wishes of his family who expected him to return home and work in the successful family business. Marc has taken a very serious approach to his life, rarely allowing others to get close.

Lauren Dey Phillips is confident, positive and has been fixated on moving to New York and becoming an actor since she was a child growing up in a small Midwestern town. Lauren has graduated from college and her focus is laser like as she devotes all of her time and attention to her career, taking no time for non-career pursuits. Her efforts are paying off as she is starting to book acting jobs.

When very young and focused on building their careers, Marc and Lauren meet. Despite an obvious attraction, decorum dictates that their relationship remain platonic.

One major complication is Miriam, Marc's longtime girlfriend and the daughter of his father's business partner whose mind is set on marriage.

Over time Marc and Lauren find themselves struggling to maintain the façade of being just friends to those around them, as well as to each other.

"…A love story that weaves us into the lives of the characters until we don't want to leave their world, a love story that engages us to cry at their fictional pain and laugh at their triumphs…" Amazon Review

Lost Boy (Marc the Interim Years) chronicles Marc's life during the time that he is separated from Lauren. The novel begins as Marc, finally realizing that he's in love with Lauren, frantically returns to New York, only to find that she has left the city, permanently. Marc is devastated, but begins to put the pieces of his shattered life back together.

As a writer, I wanted to be true to my Marc's character. While Marc is a man of integrity, he's far from perfect. Marc is strong when he needs to be. He is human, and appropriately not superhuman.

He will often encounter his personal nemesis, bad timing and will face challenges with his career, with his family and with women. Though for Marc, there was only one woman who truly mattered.

With the help of old and new friends, Marc unknowingly begins a journey of self-discovery- a complicated odyssey that will eventually lead him back to the woman whose memory refuses to leave him.