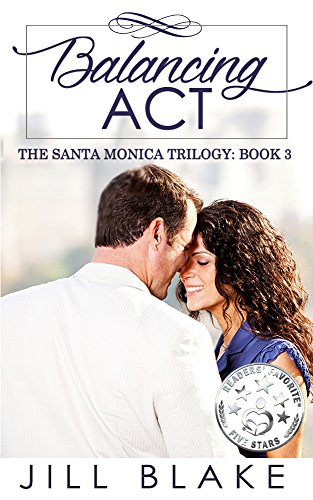 about this book: Balancing Act. This is what Angie MacDowell, a 30-something lawyer, does every day. It doesn't seem to be working that well, though. As the book opens, she feels completely out of balance.

Three years ago, when she'd left BigLaw to start a small boutique firm with two friends, they had all been on the same footing. Ambitious, energetic, still idealistic enough to believe they could conquer the world—or at least some small part of it that dealt with matters of real estate law, estate planning, and intellectual property rights. Now those same friends have spouses, kids, a life outside of work—while Angie is still alone, racking up billable hours.

Sure, she's earning a reputation as a tough-talking, no-nonsense litigator. But that same reputation seems to intimidate most men. In the echoing halls and dim back rooms of LA's downtown courthouse, she hears the whispers. Ball-buster. Bitch. All because she's female, and smart, and doesn't back down in a fight. Not to mention the fact that she probably earns more in a month than most men earned in a year.

What is she supposed to do—pretend to be less than she is, just to stroke some man's ego? No way. Not in this lifetime. Still, it might be nice to have someone to come home to.

This is where Zach Stewart comes in. He's in-house counsel for the company that Angie's suing. He's absolutely not relationship material. Good for a one-night stand, maybe. But anything longer term? Forget it.

Though it's true he doesn't intimidate easily. He's simply too arrogant. Also too much of a player. Not to mention rude, annoying, and a piss-poor judge of character.

Witness the first time Angie and Zach met, years ago at her sister's wedding. Okay, so back then Angie might not have been the world's most scintillating conversationalist. And physically she'd been more an athlete than a prom queen. But her sister had seated them together at the reception. Zach could at least have tried to say something to her besides "Nice to meet you" and "Please pass the salt." Instead, he'd escaped at the earliest opportunity to hook up with one of the bridesmaids. The bottled blonde with acrylic nails, spray-on tan, fake double-D's, and zero discretion. Seriously, who did that? In the coat closet, of all places...

(Please note: while this is book 3 of my Santa Monica Trilogy, it can be read as a stand-alone. It has a beginning, middle, end--and a guaranteed HEA! This is also a book for adults 18 and over, as it contains some steamy/explicit sex scenes.)

Other books by Jill Blake (more)