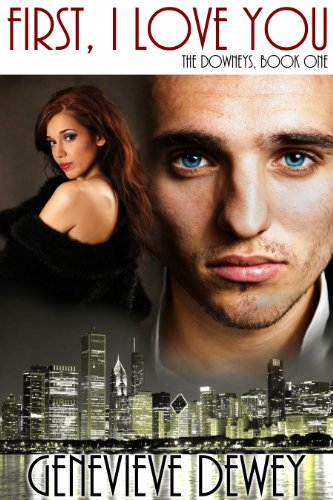 Book: First, I Love You (The Downey Trilogy) by Genevieve Dewey

about this book: I often say that First, I Love You is a story about love in all of its forms. Truthfully it is a story about being human. It is about the bonds of family – what defines a family – about the bonds of friendship and the bonds of romantic love. It is the first in a trilogy about how these different forms of love and loyalty get tangled up when we begin to force arbitrary priorities upon these roles. Family, society, career, morals, friends. What comes first, what comes second? Our ability to prioritize these emotions and loyalties depends on our enculturation and sometimes that can change, sometimes it can't.

First, I Love You is told from the Second Person narrative of six main characters. Each chapter is told in their voice and with their restricted, very different, perspectives, though the main narrative of the story is woven from chapter to chapter. When I wrote it I wanted it to be a character sketch before the major action of The Downey Trilogy itself occurred. The second book (due out in January 2013) is called Second of All and is told Omniscient. Its narrative is very much the center part of a knot, with everyone's roles, emotions and priorities all tangled up going into the third book. Both novels do not fit neatly into any one genre. They have elements of family saga, romance, action, crime novel, philosophy, chick lit, and a wee bit of mystery. Just as the theme is that being human means to have several different roles, loyalties and emotions many of which contradict each other and are intertwined and inextricable, I did not want the plot to be bogged down with a pre-defined formula.

I hope you enjoy getting to know the Downeys and the people they love!