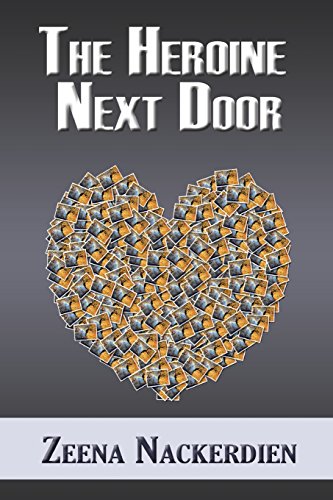 Book: The Heroine Next Door by Zeena Nackerdien

about this book: The book is about a middle-aged woman integrating her immigrant past in Africa with the gift of education she received in the USA, in order to give back to her community. I have met many people who are first-generation immigrants, like myself, who not only want to lift themselves up, but who want to reach back to where they came from to make a difference in the world. That has inspired me. I guess people who are curious about South Africa beyond Nelson Mandela, and who are trying to make sense of our rapidly changing world may hopefully be intrigued by this book. It took me the best part of a year to consolidate all the complex topics that found its way into this book. An acquaintance gave me the idea for the title and the heart with a collage of a peace monument constructed in Pretoria, South Africa really spoke to me. This monument represents the fractured past of South Africa, with its whites-only symbols, and the many people on both sides that died fighting for peace -- yet, when one walks on its grounds, it evokes a sense of peace.

HIV/AIDS continues to be a problem in South Africa and it is also the main issue that Leila, the main character, tries to address in this book. Instead of the stereotypes one reads about, I wanted to make her as normal as possible, and weave in many of the experiences that a first-generation immigrant adjusts to, as they assimilate into a new society. That was tough to pull off. As a researcher, I took a deep dive into many papers. As this was my first novel out of the gate, I learned how tough it could be to tell a multi-dimensional story. Hopefully, readers will be entertained and, if some are moved to think more about the issues I have raised, that is great.

Here is a summary of the content:
The emotionally-wounded survivors of the 9/11 attacks include a fifty-year old, South African Muslim scientist, Leila, who lost her fiancée, Khalid, on that fateful day. She is the narrator of a story threading together the lives of four South African Muslims navigating a technologically advanced and increasingly-complicated world. Initially tentative in pursuing her dream to aid patients with HIV/AIDS and other diseases (following deaths of loved ones to these illnesses) in the face of adversity encountered as a US immigrant, Leila finally asserts herself in middle age to carve her own identity and provide possible solutions to the management of diseases rampant in Sub-Saharan Africa.

Video: The Heroine Next Door by Zeena Nackerdien