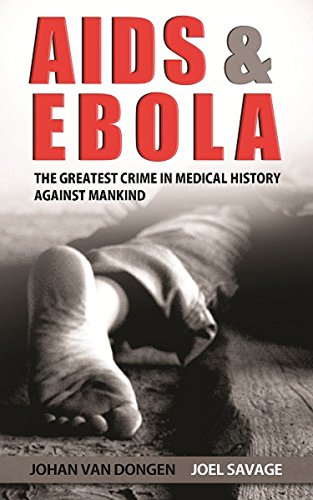 Book: AIDS AND EBOLA - The Greatest Crime In Medical History Against Mankind by Joel Savage

about this book: There is time for everything, a time to sow and a time to reap. It's now time to open up crime covered up decades ago. Aids and Ebola are medical crimes against humanity. Just as the Germans planned to exterminate all the Jews, the same, America, Belgium, Holland and the World Health Organization planned to depopulate Africa, with contaminated vaccines.

But not only Jews were used for horrific experiments. Gypsies, orphans, babies, mentally disabled persons, prisoners and homosexuals were purposely infected with contaminated vaccines which cause not only various brand new diseases but also Aids and Ebola. But the majority of people affected by Aids and Ebola are black skinned people. (Africans).

Long before the outbreaks of Aids and Ebola in Africa, the viruses responsible for both Aids and Ebola had already been created in laboratories. The years between 1960 and 1973, during the darkest days of the cold war in which dangerous experiments on human beings secretly done and massive polio and smallpox vaccinations were used, guided by the WHO and CDC, and mostly paid by the Rockefeller Foundation.

Not everyone has pleasure in wickedness. To avoid animal cruelty and find a substitute to carry on with his experiments, Micro-surgeon and scientist Johan Van Dongen invented the "Anastomosis Simulator" and the "Artificial Rat"and received the "Prize Alternatives for Animal Experiments" from the Ministry of Health, of the Dutch Government, at the Annual Congress of Animal Technicians, on November 3, 1993.

But his nightmare started when his native country recognized him as a whistle blower for revealing that Aids and Ebola are human made and tested on Africans, in order to find vaccines against it for military defending purposes in two books he published in Dutch.

The Dutch government, journalists and medical establishments discouraged the sales of the books with bad reviews and finally banned them, then afterwards lost his job and house. "The things I didn't lose were my wife, brain and the courage to continue the revealing of the truth about the real origin of Aids and Ebola," says Professor Johan Van Dongen.

Professor Johan Van Dongen for a very longer time was fighting this battle alone, until he met the Belgian – African journalist, writer and author Joel Savage, hence; the publication of this book. "I am not qualified to polish the shoes of Malcolm X, Martin Luther King Jr, Marcus Garvey, Kwame Nkrumah etc; so death doesn't mean anything to me. About the truth on Aids and Ebola, no stone shall be left upturned," says author Joel Savage. Get your copies at Amazon and find out the truth.