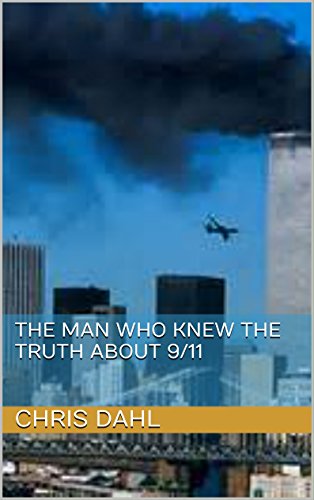 Book: The Man Who Knew the Truth about 9/11 by Chris Dahl

about this book: The police found him dead in his townhouse after getting an anonymous phone call. The police entered his home and found him buried in a pile of cryptic notebooks, dog-eared books and tattered magazines. His cat strolled through the mess he left behind. A neighbor who was strolling by was hauled in to see ifs he could shed any light on this curious situation.He couldn't, but he did take all the notebooks, journals and books back to his house where he attempted to piece this whole mystery together. What was this man trying to do? Over the course weeks, he discovered the man had locked himself in his home after cashing his last paycheck, fortified with booze, smokes, food and a gun. There, he tried to find the final truth about what happened on September 11, 2001. The neighbor could only surmise that the mystery man had either made the most spectacular discoveries about that fateful day -- or he had quite clearly gone insane. "Reality" had disappeared and only questions were left for the neighbor, the police and the man who was found dead at his kitchen table. In the end the police and the neighbor walk away from the case wondering if they had stumbled upon the best kept secret of the 21st century or if they had just wasted their time on the ranting of a madman.They agree the case may never be solved, but it was certainly an interesting one -- and a heck of a read.

The Man Who Knew the Truth About 9/11 is an analysis of a uniquely 21st century personality type: the conspiracy theorist. Although conspiracy theories have been around for many centuries, the advent of 9/11 seems to have created a new, very powerful strain of this person and this psychological leaning. I am a part-time, victim of this psychology, using my spare time to trove through conspiracy-related websites and books. Admittedly, I almost fell into this abyss. Then I decided to examine it -- and this book came out of that investigation.