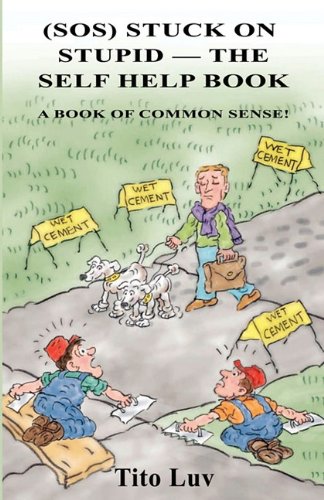 Book: (SOS) Stuck On Stupid -- The Self Help Book: A Book of Common Sense! by Tito Luv

about this book: (SOS) STUCK ON STUPID-THE SELF HELP BOOK is an "intelligence" book that explains common sense to individuals between the ages of 21 and 55. During this modern era when 1 out of 4 Americans do not read books, we are breeding a country of ignorance in our schools, in our government and in our families. Ask a person a question and many of them hesitate half way through their answer. Hence, (SOS) Stuck on Stupid has arrived. This is a self help book.

Our citizens are more interested in playing electronic games and various other toys of entertainment than educating themselves. However, ask someone about the bachelor or bachelorette television programs and they'll likely bring you up to date. But ask them about Ben Franklin or any common sense historial question and they know nothing, nothing at all. Americans have lost not only there competitive edge, but also, their intellectual "common sense" edge against the rest of the world. In fact, the dearth of our knowledge has become appalling. Ignorance has inspired me to share this writing with readers who actually give a damn about life and their country's well-being.

I personally designed the front cover telling artist what I wanted them to create. There are two tired hard working men who have spent all day (cementing)laying a new sidewalk. They've placed "Wet Cement" signs everywhere possible. Only to look up with horror on their faces to find a man and his two leased dogs stuck in dried cement. The man is (SOS)Stuck on Stupid. He also lacks common sense. Therefore, after taking a deep long look at the rhetorical judgement penned throughout my book,it continuously angered me over and over again thinking that no living human being should live life in such a squalor of stupidity. Please! It's just not that difficult to read a book and then to learn.

I've learned from writing this book that under-educated minds, as far as modern intelligence is concerned, forever showcases what losers we are becoming. Nevertheless, what I wish for readers to understand is that the Roman Empire died because they (the citizens)stopped learning. In addition, they stopped caring and began to take their country and its leaders for granted. Some say that ignorance is bliss...I merely say that "ignorance is still ignorance." Those who "read" can rule the world. But, how does a person know if the rulers of governments rule the right way or the wrong way. How would you know? By using your common sense!

Socrates said that..."The problem with not involving yourself with politics is that you allow lesser minds to rule over you! " There's just no way that citizens of these not-so-United-States can continue living a proud safe existence with the nonsense happening in today's world. Once our country led. Now were being led. You...use your judgement! You...make the call!

Video: SOS - Stuck On Stupid the Self Help Book by Tito Luv