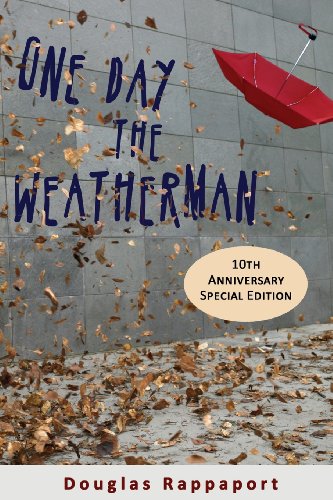 Book: One Day the Weatherman by Douglas Rappaport

about this book: "One Day The Weatherman" is a coming-of-age novel, but it's not just the transition of a boy to a man, but also a coming-of-age for several other characters, including his estranged father. I came to realize while writing this book, as well as in my follow-up book, "Victim Of Circumstance" (non-fiction), that a person doesn't just come-of-age once in their life. We are all constantly changing, transitioning, adapting to new people and new environments. Life is not a straight road and that's a universal truth, and I guess it's also one of my writer's themes that I somehow keep returning to.

"One Day The Weatherman" was my first novel and was written during a four year period between 1997-2001. I started it in Southern California (Los Angeles area) and completed it in Marin County, San Francisco, where the first half of the book takes place. (Lucas's family lives in a fictional version of Mill Valley, California.) The bookends of the novel take place in a fictional version of a no-longer existing coffee-shop that I used to frequent on the Third Street Promenade in Santa Monica, California in the mid-90's. This same coffee-shop is where the idea of the novel introduced itself to me. A screenplay adaptation was later completed and represented but is un-produced as of today.