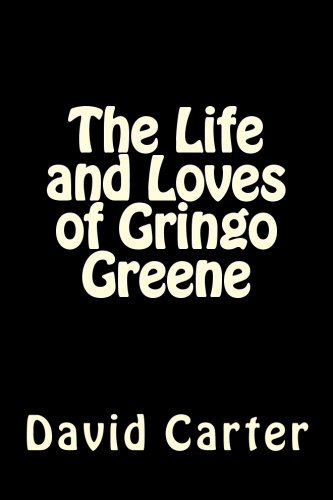 Book: The Life and Loves of Gringo Greene by David Carter

about this book: The Life and Loves of Gringo Greene took me five years to complete. I kept coming back to it and changing and revising and though it was a long drawn out process, in the end I think it was worth it.

When I'd finished, it was 575 pages long, but with fairly radical revision it's down to a more manageable 475 pages, and most of the people who have read it seem happy that I left it as long as that.

The title came into being after the character had formed in my mind. He's an amalgam of four or five different guys I once new, and, with apologies to Monty Python, he's a very naughty boy! Though hopefully his heart is in the right place, but maybe that's for you to decide.

So in the end I went for the minimalist white and black look – yes, I know you are going to tell me I went for the cheapskate look, but do you know something? I like it, and more to the point, it fits well with the book because Gringo Greene is besotted with the colour black, so he would definitely have approved.

The hardest part of writing the book were the sex scenes, (aren't they always?) and yes, there are a couple of those too, but not graphic, and not heavy, and always I have tried to keep the humorous aspect in there too.

What is it they say? Never laugh at anything in a man's bedroom, men can be sensitive souls, so I am told, but there are plenty of laughs here, both in the bedroom, and out.

I couldn't possibly comment on what research I did for the book, tee hee! And as for what I want to say to the reader, well I dearly want them to have a good time, to enjoy the read, to get into the book pdq without too much effort, and to want to come back for a second dose (pardon the word) of Gringo Greene, he's considering making a comeback after all, so I am told, but perhaps most of all, I want the reader to remember the book long after they have set it down for the last time, and to remember it enough to tell their friends and family about it. I'm vain enough to imagine they just might.

Thank you, wherever you are, for reading my page, and thank you to this website for allowing me to tell you about Gringo Greene and for publishing my words,
have fun,
David C.

• "This has got to be one of the most fascinating books I have ever read."

• "Within its genre it is one of the best books I have ever read."

Video: The Life and Loves of Gringo Greene by David Carter