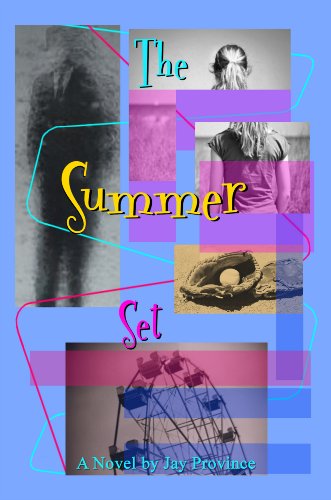 about this book: I had a dream about a carved Eskimo seal called 'The Seal of Approval'. The dream stayed with me and I integrated the seal with other dreams and musings stimulated by reading The Mothman Prophecies. Also at this time I came across the fact that in 1956 Roswell, New Mexico won the Little League World Series. I thought that was a very peculiar coincidence considering the myth of the Roswell alien crash in 1947. Also in 1956 the Little League was involved in a battle for its soul - whether to maintain its small town roots or sell-out to big city corporate interests. All of this played in my mind and I would see scenes from the novel. I came to know the characters and eventually they told the story. Over a two year period a nostalgic tale of greed, spirituality and friendship evolved. The Summer Set is the result.

The Summer Set is primarily a coming-of-age tale of friendship and affection between two boys and two girls. The story is set in 1956 Eisenhower America with its backdrop of McCarthyism and corporate conformity. The growing threat of a group of deadly dark-suited men gradually provokes the teens to join forces and confront a raft of mysterious paranormal occurrences. Though geared to mature young adults ages 11-17, the nostalgic and 'clean' novel is an interesting and fun read for all adults ages 18-68. Boys love it!

The title comes from a teen girl's T-shirt. I was struggling over the title for weeks. I knew I wanted 'Summer' in the title because the summer is really a character in the novel, and there this young girl was - outside an emergency room - with a T-shirt reading 'I survived The Summer Set'. I knew that was the title. I had my 'set' of four teens and there was 'the summer'. I later learned that The Summer Set is a popular rock band with a dedicated teen following.

The cover comes from my imagination - broken images with retro colors and a winding path through some of the main images in the novel - a blurry man, a Ferris Wheel, a girl at beach, a baseball glove. I created the design in Photoshop. I am a trained artist and designer, and have painted in oils since the age of ten. I also won school and city wide art awards in my hometown of El Paso, Texas at the age of fourteen - the same age as Peter, Mike, Jo and Karen. I drew heavily on some of my own experiences and relationships as a young teen growing up in El Paso for some of the emotions and events in the novel.

I did lots of research for the book - mostly through web searching when I had a question, but I also read books on the era. I am a stickler for historical accuracy and detail, though I didn't allow historical accuracy to interfere with dramatic fiction when the two were in conflict.

I learned in writing the book that I have to trust my characters to tell me what they will do when they are interacting together. Sometimes I would just give the barest details to my characters and let them come to life in the scene. I could see what they could see, and feel what they felt.

I put love into every page of The Summer Set. I hope you see it and feel it!