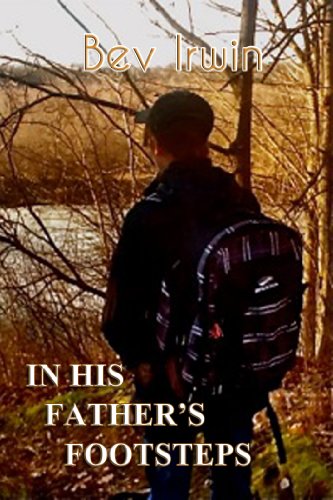 Book: In His Father's Footsteps by Bev Irwin

about this book: Where is he? His father had promised he'd be home before now. What was Jason supposed to do? He was just fourteen, a boy. But he couldn't stand the tears in his mother's eyes. He had to do something. He would follow the trail his father had taken more than a month ago, search through the wilds of Northern Ontario and find him.

• "A sweet, heart-warming story about a fourteen-year-old boy who is forced to grow up fast--and how...In His Father's Footsteps is a coming of age story about courage, desperation, love of family, and a young boy's determination not to let fate take its course, but it's highly entertaining, a great read from an accomplished author." — Taylor, reviewer

• "In His Father's Footsteps is touching and inspiring story of a young boy's quest to prove himself to his father and to himself ... Irwin's character development is superb as always, and her story has a ring of truth, I found myself fascinated with Jason's adventure and felt like I was right there with him." — Regan, reviewer

• "Irwin brings animals and hazards on stage, their presence being more convincing than the contrived plot twists in other teen novels. Jason's endurance, skill, heroism are a result of his knowing survival skills which youths raised on vampires, wizards and futuristic technology would be surprised to see what Jason achieves with "low tech" old-fashioned equipment." — Ruth Latta, CM Magazine

• "The descriptiveness used in the writing of this book is absolutely amazing, I felt like I was making the life threatening trek right beside Jason. This was just a great read and I would recommend it to anyone looking for a quick and easy read that you just can't put down because it's so good." — Angels R Kids/Furkids

• "This is a coming of age tale for Jason who lives in a rural area, the characters are authentically written, though we primarily stay with and see through the eyes of Jason. The writing is crisp, vivid, and delightfully descriptive." — Monica