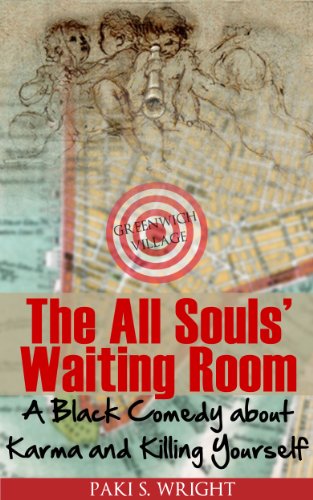 Book: The All Souls' Waiting Room - A Black Comedy about Karma and Killing Yourself by Paki S. Wright

about this book: Johnnine Hapgood had a crazy childhood. No, it was REALLY crazy.

She was a sort of psychiatric guinea pig growing up in Greenwich Village during the 50's in a group of people who wanted to change the world for the better. Their motives were high-minded but they seem to have forgotten one thing: asking for Johnnine's permission.

"The All Souls' Waiting Room: A Black Comedy about Karma and Killing Yourself" is about a young girl's journey after a suicide attempt. Rather than a blissful "lights out," Johnnine comes to in the Old Vienna part of the Waiting Room, and has to confront her young life's painful memories, with one of the very people responsible: the volatile and very dead psychoanalyst Wilhelm Reich.

To soften the blow of her Life Review, as it's called in the All Souls' Waiting Room, other characters are brought on board to help: five musical cherubs, who sing the song of Johnnine's bruised soul to Xofia, the gravel-voiced essence of feminine wisdom.

• The All Souls' Waiting Room, where all souls go for re-routing in between lives, has surprises in store for all of them.

• Michael Nagler: "Don't be fooled by the uproarious humor. 'The All Souls' Waiting Room' is a penetrating social commentary written by a wide-eyed young witness."