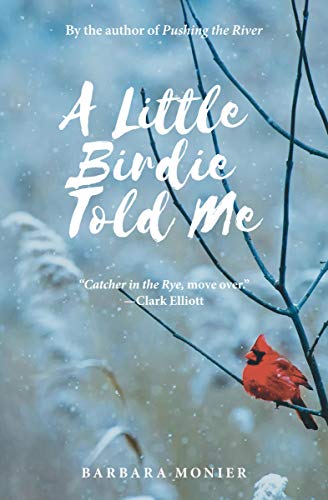 Book: A Little Birdie Told Me by Barbara Monier

about this book: A LITTLE BIRDIE TOLD ME, a novel by Barbara L. Monier, takes place over the summer and fall of 1972, in the six months leading up to narrator CATHERINE's sixteenth birthday. Thrust headlong into an identity crisis when her mother reveals that she had actually planned to marry someone else, Catherine decides to begin a journal in an effort to find solidity and permanence in her own life. Hilariously funny, impetuous, impatient, sometimes annoying and always remarkable, Catherine freely quotes literature, pops pills, and casts her eye unflinchingly around her world as she takes the reader through a unique coming-of-age tale.

During the awkward summer in which Catherine is just barely too young to get either a paying job or drive, she learns that her fraternal twin sister Lizzy has been accepted at a prestigious dance academy and will be leaving home, separating the sisters who had begun their lives, Catherine muses, "so close that every bit of our bodies was pressed tight tight together, a time when we didn't even understand that we were two different people, but just felt somehow that we were one being with an extra bunch of limbs."

As Catherine's mother continues to drop hints about a former life and a lost love, Catherine decides to undertake her own detective mission to piece together the puzzle of her mother's past. As she scours the nooks and crannies of her home, she finds remnants of her own childhood as well as her mother's youth. When Catherine ultimately discovers a large bundle of letters from her mother's former lover, as well as a handful that her mother wrote to him, she encounters a young woman who seems to be an entirely different person than the mother she knows.

Catherine sneaks the letters from their hiding place every chance she gets and pours over them in her room; meantime, a very confused cardinal continually attacks his own reflection in her window. Catherine becomes nearly obsessed with both her mother's story and the troubling behavior of the bird, her feelings for each one paralleling the other as she moves from concern, to anger, to frustration.

Set quietly against a background of radically shifting times – the near end of the Vietnam War, racial tensions, changing sex roles and more, A LITTLE BIRDIE TOLD ME is ultimately a deeply affirming story. At the book's end, as Catherine lay in traction following a car accident, she has learned lessons from her own experiences, her mother's, and from the relentless bird; she is ready and resolved to move forward in a fully realized, fully embraced life.