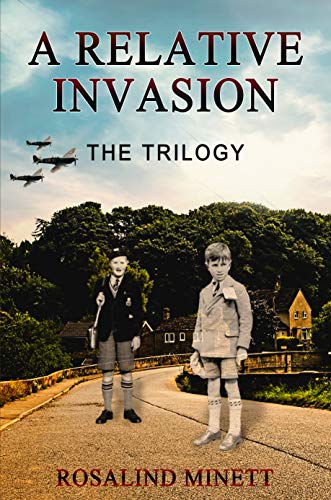 Book: A Relative Invasion - The trilogy by Rosalind Minett

about this book: "A classic saga with seeds of insight that pull you deeper in as the story builds"

1937-1951 London. In this coming-of-age trilogy, two boys develop a fateful rivalry. As war threatens, sturdy, well-meaning Billy Wilson suffers his own war when his devious cousin, Kenneth, enters his life. Smaller but older, artistic Kenneth envies Billy's superior strength and home comforts. Kenneth's porcelain looks and perfect manners blind the parents to the way he manipulates and bests Billy at every turn.

Billy turns for support to his secret symbol of power, a Cossack sabre, which has its own history in the Polish/German border at the start of WW1. That story inspires Billy and sustains him during evacuation, privation and bullying as the war develops and rages.

Those readers who like a long read now have the three books: Intrusion, Infiltration and Impact in the one volume.