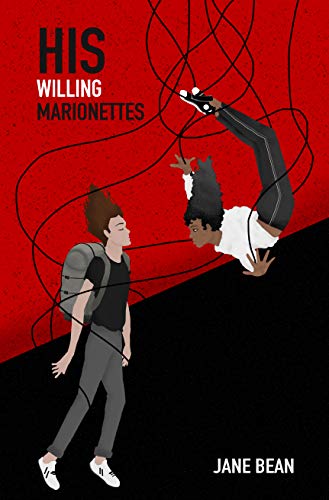 about this book: "His Willing Marionettes" is a cautionary tale, written for the 16+/crossover market. To quote the blurb on the back cover:

Darren is handsome, rich and clever, but it's unwise to befriend him… like his friend Leroy did.

Darren is a bully and a coward, with no empathy or feelings of guilt. If you do his bidding and something goes wrong, you're on your own… like Leroy was.

The novel started out as a short story entitled "Nature or Nurture": a story of three classmates, Darren, Joel and Grace, whose lives become inextricably linked after the death of Grace's twin brother Leroy.

After writing the short story, the characters wouldn't give me any peace until I had expanded their story to a full length novel. Originally called "The Main Man", this took them on a three year journey through school and into a new phase in their lives as eighteen-year-olds. The ending was inconclusive, so once again I felt the urge to continue. The project has now expanded into a trilogy of the same name as the original novel.

Book 2 "Tightening His Grip", ends on a cliff hanger which leads into Book 3 (a work in progress) "The Devil's Servant".

Darren is the antihero of the trilogy – a narcissist who considers himself to be the Main Man. Joel and Grace both have a crush on him and become his willing co-dependants, but their future dreams are in danger of being shattered as they follow Darren's lead.

• "The author draws her audience into a world where friendship isn't straight-forward and a person's morality isn't so easy to know."

• "It seems nothing is as it appears in his deceptions and no one is immune to his game of cat and mouse. The plot is realistic and moves forward at a good pace…"

• "A book of intrigue and suspense, love and betrayal, three lives intertwined."

• "It's graphic and explicit and pulls no punches. It's a fascinating read!"