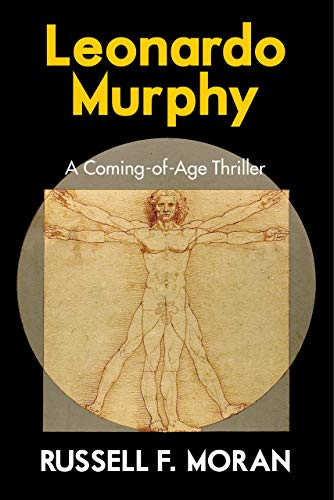 about this book: Leonardo Murphy is a coming of age novel, also known by the curious word bildungsroman. The story begins when Leonardo is 12 years old, when he had just launched a satellite into space without a rocket.

I began the book nine months ago. I choose the cover, Leonardo da Vinci's man in a circle, to capture the essence of the genius that young Leonardo Murphy patterned himself after. He formally changed his name from William to Leonardo to honor his hero, Leonardo daVinci.

I came up with the idea for this story after seeing a young genius interviewed on TV. As I wrote the book, the face of a child TV star was always in front of me—Young Sheldon. A major problem I faced, and still do, is the genre of this book. "Coming of age" is recognized as a type of novel, but there are few of them out there.

Leonardo is fascinated by Artificial Intelligence. Among his many projects, he invented a computer algorithm that writes novels, soon after he entered Harvard University on a full scholarship after completing high school in two years.

Realizing that he could easily become an insufferable obnoxious brat, he heeded the words of his beloved great-grandfather, Ezekiel Murphy, who was also a genius. "Don't be an a…hole," grandpa Ezekiel told him. Leonardo always recalled those words—and tried to obey them.

At the urging of his father, a senior FBI Agent, Leonardo is hired as a consultant to the FBI. Using his software design skills, Leonardo wrote an algorithm that tracked down the world's most dangerous gang, MS-13, enabling the FBI and local law enforcement to end the gang's activities.

At age 20, Leonardo received a PhD in physics from Harvard. Shortly after that, he entered the Navy to follow in his parents' footsteps as a naval officer.

After he left the Navy, Leonardo, now 25 years old, met a beautiful young woman named Janice Reynolds, and fell madly in love. They married a year later. By that time, Leonardo had become a fabulously wealthy multi-billionaire from his stock trading and patent royalties. Janice loves to teach at a nearby private college. When the college hits financial problems and is about to close, Leonardo buys the school.

Janice loved to say, "My husband used to be a cute little nerd. Now he's a tall, handsome, rich nerd." Janice and Leonardo, who she calls "Lee," collaborate on various secret projects with the CIA and FBI.

But their activities with law enforcement and intelligence put a target on their backs. They narrowly escape four assassination attempts, including one on their honeymoon cruise. It was then that Leonardo discovers that his sweet, pretty wife knows how to use a gun.

Leonardo and Janice, despite the dangers, love to help law enforcement. They admit to themselves that they enjoy being spies, or spooks. They even bought a Golden Retriever and named her "Spook," Whenever he's hired as a consultant, Leonardo insists that Janice be included. "We're a package deal, a twofer," he would say to any official who objected to Janice working on top secret matters.

After one of their adventures, Leonardo looks forward to getting back to a normal life. But then he realizes that they don't lead a normal life, so why bother.

Leonardo Murphy is a breathtakingly fast coming-of-age thriller about one of the most fascinating characters you will ever meet in literature. Instantly you are shoulder to shoulder with the world's most amazing genius.