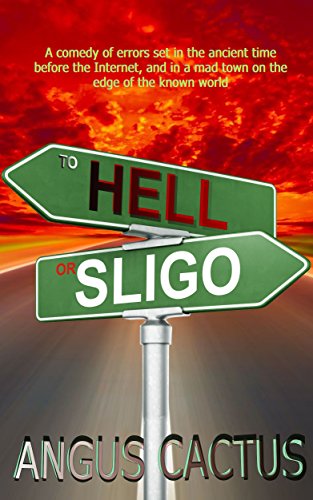 Book: To Hell or Sligo by Angus Cactus

about this book: A humorous coming of age memoir set in the west coast of Ireland in the 1980s. There is a thin line between truth and fiction, and you won't find it here in this tall story told about a ripping yarn in which fact and fiction are inseparable because both are equally absurd.

PT Barnum said that when faced with the mundane reality of the truth, 'always print the legend.'

I have always been amazed at the lengths that Sligonians will go to embellish a story when telling it. These stories grow legs and achieve a life of their own as they are retold again and again by different folk who each add a new abstract layer to the original truth. In the end, the Sligo story becomes so much prettier than the truth.

This book is to honour the art of Sligonian story telling. Within 'To Hell or Sligo', lies some real Sligonian stories which were related to me, all apparently true, and more than likely half made up. Now I have added by own layer of embellishment and mixed them into a fictional story which includes real people mixed in with a range of fictional characters. To protect the living, I have changed many of their names, and to honour the dead, I have kept their names the same.

A tall tale about buried gold brings an unhinged set of characters to a mad town and pits them against even stranger locals.

I don't know whether Sligonians still tell stories about 'blow-in' newcomers living off the fruits of gold buried by their ancestors, or even whether there are new versions of this story. These were always my favourite tall stories along with those anecdotal stories which featured nefarious outsiders being unexpectedly thwarted by brave or obstinate locals. Of course, this all had to go into the storyline.

To Hell or Sligo is also a homage to favourite comedy film plots. Those are: In Bruges, Pineapple Express, and the Ealing comedy, The Lady Killers.