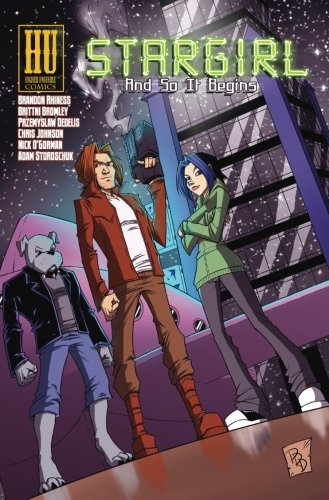 Book: Stargirl - And So It Begins (Volume 1) by Brandon Rhiness

about this book: This volume collects the first 4 issues of Stargirl, the space adventure story of Lasha Trinity and her canine companion, Rover.

The story is set in the future after the Earth is no longer habitable and the human race lives in a ring-shaped space station that orbits the Earth.

Stargirl tells the story of Lasha Trinity and her dog, Rover, and the adventures they get into after the Earth ring-station is destroyed and the human race is plunged into a war with an alien race.

Lasha and Rover encounter all sorts of peril and excitement on their adventures and meet all sorts of allies and aliens.

Stargirl #1 was the first comic book I ever published. It took a year to make and I learned a lot. Brittni Bromley did all the artwork on that first issue.

We continued on and over the next couple of years made 3 more issues. We had a great response to the comic. People seemed to love the fun adventure style of the comic.

After reaching 4 issues, we decided to collect them into one volume and release it for people to read!

I hope you love it!