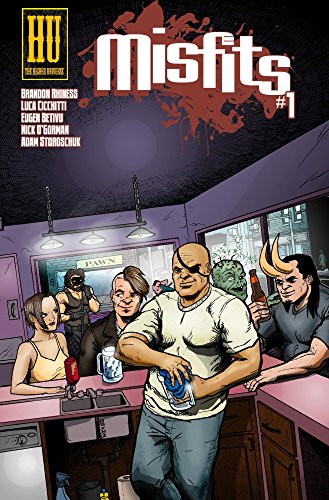 about this book: Misfits is a comic book series published by Higher Universe Comics.

Misfits is the story of a ragtag, disorganized superhero team trying to get its act together. This is proving to be difficult when they spend more time at the bar than they do fighting crime.

Things get even worse for the Misfits when their most powerful member, Demonman, leaves the team to pursue a "regular life."

In this issue Demonman's new job interferes with his first date with a girl he's had a crush on for a long time. He also has problems with his landlord regarding his rent.

Oh yeah - and the Misfits battle a drug-addicted gorilla.

Misfits was produced by an international team of comic book creators.

Here's what some people have had to say about this comic:

I've just read Misfits and I love it!

I think it's better than Ghoul Squad. However I see a certain parallelism between them (a group of monsters that have to fight against an evil one). I think the point of the story is the way you tell the action: day by day in the life of these guys.

I love the junkie gorilla and Demonman!

I like the storyline of Misfits, funny thing is…it's very relate-able.

I have to say I think Misfits has the potential to go far.

In terms of artwork, I thought that the page with the gorilla growing in size was outstanding. I thought the writing in general was very well done and I never found myself losing interest in what was going on. There is a lot of dialogue with characters sitting around and for it to hold my attention for the entire issue really says something about the quality of writing.

I just read Misfits #1. I love it! It's easy to roll your eyes when you hear about ANOTHER deconstructionist, adult take on super heroes. It's been done so many times, and done well so many times that it's hard to believe there's new ground to tread. You managed to tell a straight-up super story, and be able to tie it in seamlessly with a weird fish-out-of-water story, without it coming off as spoof or parody. It feels like a more personal superhero story.

I honestly had never really heard of serious indie comics and I bought your comic and it's fucking pro, I'll def be getting the next one when it comes out. It kinda reminds me of The Watchmen in that the supers have licenses and are paid, and some choose not to take that path so it adds a very human struggle to Demonman's life. Diggin it!

Get Misfits #1 at this link: https://payhip.com/b/ocrU www.thehigheruniverse.com
You will get a PDF (127MB) file.