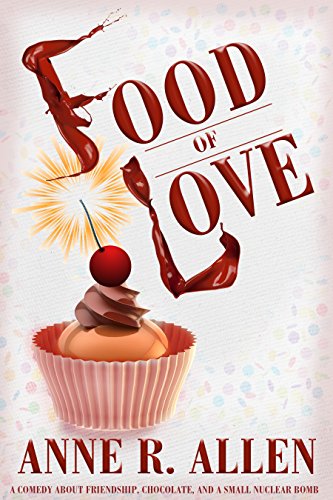 about this book: After Princess Regina, a former supermodel, is ridiculed in the tabloids for gaining weight, someone tries to kill her. She suspects her royal husband wants to be rid of her, now she's no longer model-thin.

As she flees the mysterious assassin, she discovers the world thinks she is dead and seeks refuge with the only person she can trust: her long-estranged foster sister, Rev. Cady Stanton, a right-wing talk show host who has romantic and weight issues of her own.

With the help of a bald hairdresser named Athena and her lesbian lover—a super-sized rapper named Lady Fatima—Reverend Cady delves into Regina's past and discovers Regina's long-lost love, as well as some dark secrets that connect them all.

Meanwhile, Regina re-connects with the man she thinks abandoned her a half a lifetime ago—a former KGB agent nicknamed Mickey Mouse—who must steal a small nuclear bomb now in the hands of the mysterious entity who has targeted the princess.

Food of Love is a roller-coaster comic thriller about the evils of international arms smuggling, intolerance, and the cult of thinness.