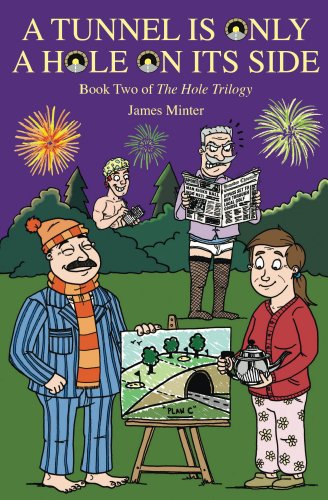 Book: A Tunnel is Only a Hole on Its Side (The Hole Trilogy) by James Minter

about this book: Colin and Izzy were traditional farmers but like many regulated jobs regulation took over from doing what they like best (teaching, nursing etc). Instead of farming they became pen pushers filling in forms, collecting statistics and anything apart from growing cereal.

The straw that broke the camel's back was when their subsidy grant failed to materialise because they'd not completed the on-line form. Colin, depressed, took inspiration from a doughnut - the hole to be precise. He noticed everyone needs holes all the time to do anything. Walking from room to room requires you to pass through a hole (doorway), put on your jacket and you put your arm into a hole (sleeve), boil a kettle and you plug into three holes (electricity socket), and he concluded: someone has to supply holes!!!

Inspired he set up his Hole Farming business. Book 1 of the Hole Trilogy - The Hole Opportunity" see Colin win a contract for 18 holes on a golf course. However, catastrophe follows and he creates in the club Captain - Major Woods, and arch enemy. This book - A Tunnel is Only a Hole on its Side - picks up with the Colin/Major confrontation to see it exacerbated when the council decides to put a new road bypass through the golf club.

This is British humour, comedy, satire at its best. A light read with no profanity.

Other books by James Minter (more)

Video: Reading from A Tunnel is Only a Hole on its Side