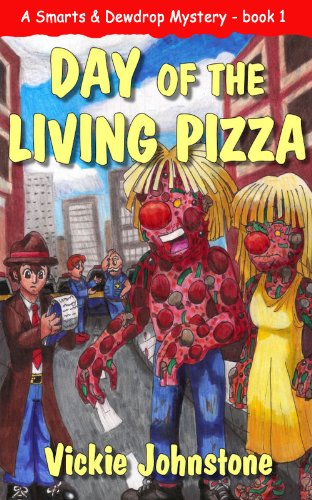 Book: Day of the Living Pizza (A Smarts & Dewdrop Mystery) by Vickie Johnstone

about this book: Day of the Living Pizza is a comedy zombie story that you can sink your teeth into...

I wrote this story for The Gage Project book, published by Inknbeans Press, which is raising money for children's charities. The book came about because a friend's son, Gage Bailey, was due to go into hospital for a scary operation. Jo of Inknbeans organised the book for him, which is an anthology of stories, poems and jokes. I made this ebook version free on Amazon US in a bid to promote the bigger charity book, which also contains some other stories and poems of mine. When writing the story, I asked Gage's mother what his favourite things were. She said The Walking Dead, chicken, pizza and rock music. All of these things worked their way into the book and the pizza zombies were born.

The genre is fantasy, comedy horror, and the target readership is from age 10 up.

Detective Smarts of Crazy Name Town has a problem. Doctor Boring and his receptionist have been bumped off, and the only clues at the scene are some olives, tomatoes, mushrooms and a sprinkle of oregano. With the townsfolk dropping like flies and strange figures stumbling down the streets, Officer Dewdrop has an idea.

Book 2 in the series is Day of the Pesky Shadow and it's just as silly.

• "It will make you laugh, make you hungry, and make you want to read it again and again!" — Gage Bailey, age 14

• "Part zombie apocalypse and part young adult crime mystery and fully hysterical, this short work delivers many grins and chuckles as Detective Smart matches what passes for wits with a town of Pizza Zombies with limited vocabulary." — Ed Drury

• "A really fun read for kids and kids at heart!" — Linda Rae Blair

• "If you are in the mood for some silliness and need a good laugh, Day of the Living Pizza is the book for you." — Greta Burroughs

• "I couldn't help it, I found myself laughing aloud many times as I read this story. The idea of someone running down the street screaming while a giant pizza man chased her was both funny and scary." — Ey Wade

• "Vickie Johnstone will brighten your day with Day of the Living Pizza." — Gregory S Lamb