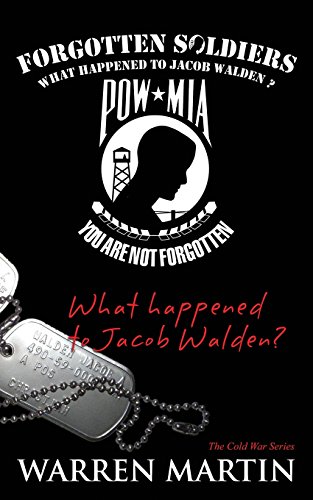 about this book: Forgotten Soldier is a Cold War Mystery that has never been told. A story about a Forgotten era where the Cold War was fought in places like Europe, Russia, Korea, Vietnam and throughout the world. What Happened to Jacob Walden is a mystery about what happened after he was shot down in Vietnam in 1970. Like many others, Jacob Walden never returned home, but unlike most others, he supposedly reappears 40 years later, spurring a Journalist to investigate. The Journalist tracks down who he believes to be Jacob Walden, encounters a secretive Operative, and discoverers the answer to What Happened to Jacob Walden, an answer that he and no one else may really want to know.

Forgotten Soldiers is a compelling Historical War Fiction with Action, Drama, Mystery and Espionage, filled with twist and surprises. It's not just a POW story - it's a story about the Forgotten POW who never returned. "To tell anymore would be a spoiler" one reviewer has said and others have asked "Did this really happen?"