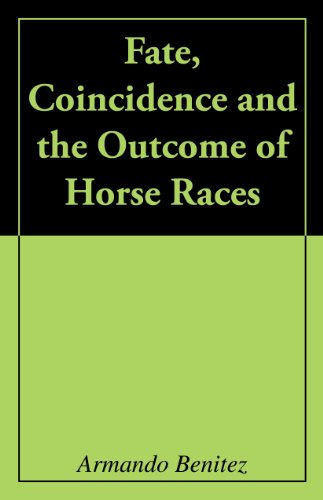 Book: Fate, Coincidence and the Outcome of Horse Races by Armando Benitez

about this book: Fate, Coincidence, and the Outcome of Horse Races, by Armando Benitez, explores the mystery of coincidence, proposing that coincidences are a sort of lapsus linguae of Fate. Consequently, the author insists, there is a way in which we can exploit these lapses, which are, he says, instances of laziness and slipshod work on the part of Destiny, which he equates with the ancient fates of Greek mythology. By paying attention to these strange occurrences, Benitez says, we can make them pay off for us, principally at the race track, but also in many other aspects of life, including the stock market. With quiet humor, the author narrates many a coincidence that prompted him to make a winning bet at the race track. As, for instance, placing a winning bet on a filly named Stepping Emily because that same day he had made the acquaintance of a young lady named Emily who "walked with a curious mincing gait." Or cashing in on a horse named Leaky Luke because he had seen an acquaintance at the track just before the race changing the diaper on her little boy, who was named Luke.

Besides being an entertaining read, this book contains many a thought-provoking instance of other weird occurrences involving coincidence from ancient times to the present, with a pseudo-scientific theory on why they occur, how they should be interpreted, and the way to combine our handicapping skill or lack thereof with the occurrence of a coincidence.