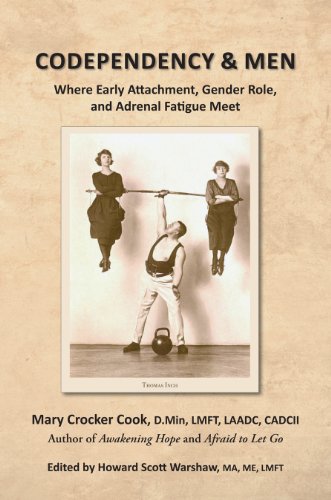 about this book: Codependency and Men was written to explore the way the Codependency behaviors appear in men. Most men do not identify with the term "Codependent," unaware of the role anxiety and distrust of relationships play in their relationship reactivity. I have seen many of them in my work as a therapist over 25 years. While early attachment issues and adrenal fatigue cross genders, gender role and gender identification strongly affects the way Codependent behaviors manifest in men. In fact, avoidant Codependency is often normalized as gender role and therefore not addressed at all! Codependency and Men has been used in men's book clubs and men's groups to open the discussion using male language and examples that clarify this important issue in their lives.

Codependency and Men is filled with helpful vignettes and quizzes such as an intimacy inventory or male gender role conformity scales to assist men to identify the ways that anxious or avoidant codependency patterns may be affecting their lives.