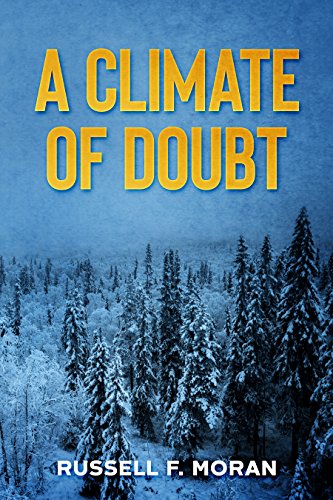 Book: A Climate of Doubt - A Novel of Climate Change by Russell F. Moran

about this book: A Novel of Climate Change and Terrorism

Forget what you ever heard about climate change. It doesn't make a difference.

Forget your preconceived notions about reality itself. You now live in a new reality.

Instantly, you are in a new world, a horrifying world, a world you don't understand.

On a hot summer day, Homeland Security Secretary, Rick Bellamy, and his wife Ellen, a famous TV talk show host, walked along the ocean front by their beach house trying to escape the heat. Suddenly the temperature dropped from the high 90s to below freezing in a matter of minutes. It began to snow—on July 16.

The temperatures across the country and the world plummeted, creating winter in summer.

Bellamy and the rest of the government struggled to cope with the suddenly new climate, but to cope, they first had to find out what happened. And they have no idea.

Scientists blamed the weather on a sudden acceleration of climate change, but they were unable to explain a 60-degree temperature drop in a matter of minutes.

Two astronauts in an American space station realized that the sudden weather calamity coincided with a test of the 20 satellites that the space station controlled. But they don't know how it happened.

Journalists and everyone else focused on a huge American corporation that owned the space station and the satellites. Could there be a connection between the satellite tests and the radical drop in temperature?

As the deaths piled up and the world economy tilted toward disaster because of gigantic summer blizzards, Rick Bellamy and his team struggled to find answers before it was too late. Was it a sudden shift in climate change or did it have something to do with the satellites? The biggest question remained—was the catastrophe an accident, or was somebody controlling the weather? Was it terror?