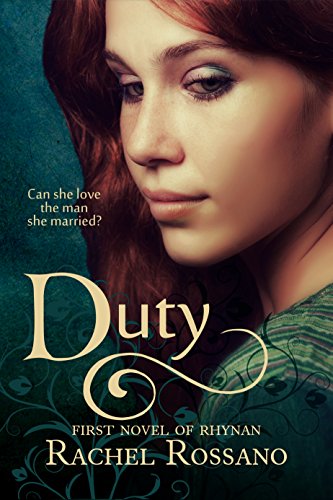 Book: Duty - a novel of Rhynan by Rachel Rossano

about this book: The book idea began with an opening line: "The red one is mine," he said.

The speaker is Lord Irvaine, a newly titled noble under the new king. In the aftermath of a bloody civil war, he is rewarded for his loyalty with land, a title, and a wife. He quickly discovers that claiming his rewards will take more effort than he expected. Part of the land has been mismanaged, causing starvation in areas. His title, transferred from a dead line, comes under contention by an old enemy from the days before his rise to wealth and power. Securing what is his will require more than just the skills he learned on the battlefield. It will take the help of an unusual ally, his new wife.

The last living member of a noble family, Brielle fights her cousin and current holder of her family title for every crumb her village eats. The strife between the cousins runs strong, originating in childhood. So, when she discovers her conniving cousin has sold her hand in marriage to save his life, she isn't particularly astonished. What does surprise her is her new husband. He is not what he seems.

Duty: a novel of Rhynan is a fast moving story with the characters constantly on the move.

Video: Duty - a novel of Rhynan by Rachel Rossano