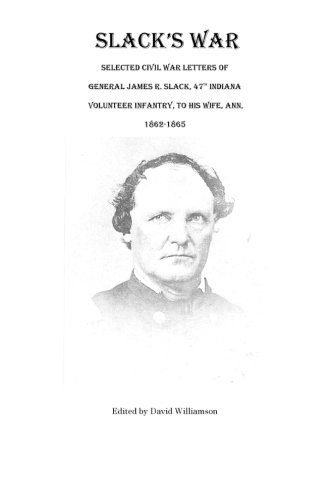 about this book: Slack's unabridged letters from the field, with introductory comments to each, were compiled and arranged in chapters to complement excerpts contained within "The 47th Indiana Volunteer Infantry: A Civil War History,"(McFarland, 2012).

For those interested in the life of 19th century women, Slack's comments, omitted from "The 47th Indiana Volunteer Infantry: A Civil War History," contain very interesting insight into the life of a well-to-do wife and her children at home in Indiana during the war.

Slack's letters, which contain comments that were dealt with in depth in "The 47th Indiana Volunteer Infantry: A Civil War History," reveal his views on everything from West Point Military Academy to the anti-war "Copperheads" on trial for treason in military court at Indianapolis (including his former friend and colleague, Lambdin P. Milligan of Huntington), to his post-war assignment on the Rio Grande and his observations about the French invasion of Mexico, Mexican Royalists, Maximilian's Imperial Army, and Juan N. Cortina of Juarez's Republican Army at Matamoros.

I chose the title because of his private but outspoken "war" on everything from becoming a "War Democrat", to his fight with his pre-war Indiana Democratic allies who had turned anti-war "Copperheads", to his negative opinion of West Point Military Academy, to his opinions about the French invasion of Mexico from his post-war assignment at Brazos Santiago and Brownsville, Texas, on the Rio Grande.