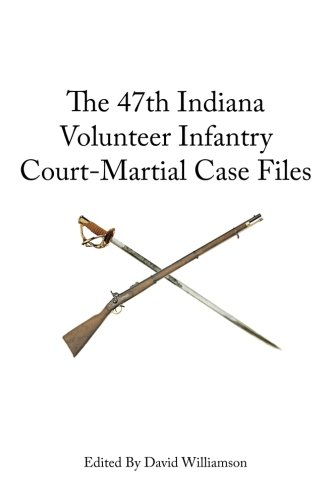 about this book: This study of Civil War military trials in the field, compiled and transcribed verbatim by the author, contains the complete transcripts of all nine cases of soldiers and officers of the 47th Indiana Volunteer Infantry who were tried by court-martial and for whom records, located and identified by The Index Project, still exist at the National Archives in Washington, DC.

Ranging from poignant to humorous, the cases involve lethal soldier/civilian encounters, the comparative rights of officers and enlisted men in the field, rowdy soldiers, absence without leave, misconduct in battle, differences of opinion among officers, violent disputes among enlisted men, the definition of "enlistment" and "desertion" in a volunteer army, and misplaced wartime paperwork.

These court-martial cases provide an unabridged example of the application of Civil War military law in one infantry regiment active in the field throughout the war. The previously unpublished information contained herein is not included in the author's recent book, "The 47th Indiana Volunteer Infantry: A Civil War History," (McFarland, 2012).