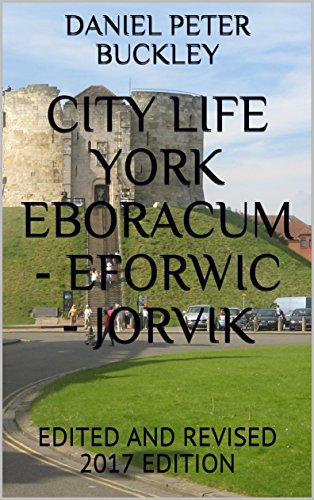 about this book: History and guide to the city of York that looks at the rich heritage and cultures that have helped to shape the city of York from its Celtic beginnings through Roman, Anglo Saxon , Viking periods up until the present.

Offering up a glimpse of the past peoples who have forged the city from a collection of farm buildings into a Roman city that counted Emperors among its many elite citizens.

Saxon princes and Kings lived within the city walls and would be crowned and baptized in Eforwic.

Viking settlers challenged the city and Eforwic became for a Jorvic during its Anglo Scandinavian period when the power in the North was shared between the rival cultures.

Saxon power finally regained control in the North but threat of the Viking raiders remained.

Norman and Angevin time periods followed and the city of York once more became a vital centre of English history and change during the Middle ages.

Visitors today can walk the city walls and visit the varied museums and art galleries along with York Minster with its breath taking spires.

Penned by a visitor for visitors City Life York is a friendly guide to an inspiring city and its diverse past and present...