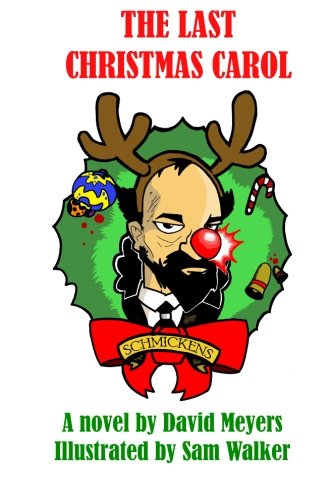 about this book: "October arrived, unwelcome as a litter of kittens on the doorstep."

Brodwyn Branson, the director of a local children's drama company, had a problem. He had a show to put on, the most important show of the season, the annual production of A Christmas Carol, for cryin' out loud – and he just couldn't do it. Why? Because he absolutely loathed it. After umpteen stagings of the beloved Dickens tale, he had reached his limit. And yet his little theater wouldn't survive without the money he could always count on it to bring in.

So Brodwyn would do it, but he didn't have to like it. And he didn't have to like the ragtag group of kids that turned up to audition, either. Or the stage mothers (and fathers) who shadowed them. Or the ghost of his former agent. Or – how's that again? The ghost of his agent? That's right, Big Lou Bitterman in the flesh (or not flesh, exactly, but whatever ghosts are made of). And she was just the first. Before he knew it, Brodwyn was up to his ears in spirits just like . . . just like . . . old Ebenezer Scrooge! What was going on? Somehow Brodwyn Branson had found himself starring in a personalized production of A Christmas Carol and nobody seemed to be following the script!

The Last Christmas Carol is an inventive re-imagining of the timeless classic by Charles Dickens. It has been adapted by the author from his musical of the same name that has been delighting audiences across the country since 1997. It includes a handful of illustrations by Sam Walker.