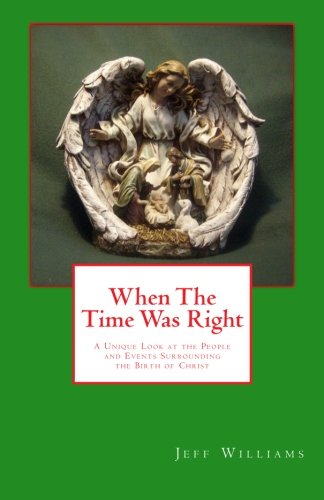 Book: When the Time Was Right - A Unique Look at the People and Events Surrounding the Birth of Christ by Jeff Williams

about this book: To say this is just another book about the true Christmas story would not be an accurate description. Its intent is to tell, from a fresh point of view, the individual stories of those most closely involved in the nativity narratives found in the Bible as recorded in Matthew and Luke.

It begins with the preparation which took place before the time of His birth, then on to those involved during and immediately following His birth. Many performers appeared on God's great stage surrounding the coming of the Messiah. From prophets and their prophecies to world leaders (i.e. Alexander the Great) and their conquests; from angelic announcements to worshipers coming from the east to see the Child in the months after His birth; God's hand moved everything into position by His supreme wisdom.

The concept for this book developed from a series of advent sermons I heard several years ago. During each of the four weeks of advent, a different main character was presented from the passages in Matthew and Luke. It was a fascinating series and piqued my curiosity, leading me to ask, "Wouldn't it be interesting to take a look at each of the individual characters involved in the Christmas story?" I later incorporated the idea into a series of Sunday School lessons, expanding from the four original characters in those advent sermons.

As I began to do research on each of the main characters I came across Galatians 4:4. It was at that point I realized there was so much more to the nativity narratives than just the story of Christ's birth in a manger with shepherds attending and wise men visiting later. God's plan for a redeeming sacrifice to atone for all sin followed a perfect time schedule set forth by God. His control over all things displayed such precision as He moved people's hearts and changed their plans. He allowed major events in history to occur at the proper time while also allowing minor events in people's lives to take place at specific moments. All of these came together "when the time was right".

As you read, it is my hope you will be encouraged by the knowledge of God's concern for you in every area of your life and of His sovereign control over this world and its events. I also hope you will discover again, perhaps from a new perspective, the wonder of the Birth of Christ.