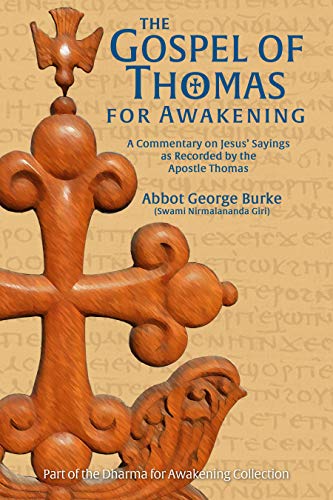 Book: The Gospel of Thomas for Awakening - A Commentary on Jesus' Sayings as Recorded by the Apostle Thomas by Abbot George Burke

about this book: "From the very beginning there were two Christianities."

This provocative quote from the Preface of "The Gospel of Thomas for Awakening" highlights the theme of Abbot George's interpretation of the sometimes enigmatic sayings of Jesus recorded by his apostle Saint Thomas. By shining the "Light of the East" on these sayings, drawn from his time in India and his in-depth study of Eastern philosophy as well as his knowledge of esoteric Christianity as a bishop of the St. Thomas (Malankara) Orthodox Church, he reveals their unique and rich practical nature for modern day seekers for spiritual life.

His studies reveal that growing evidence shows that Jesus spent his "Lost Years," and which had been the source of the wisdom which he had brought to the "West." So by viewing Jesus' sayings in light of Indian (and Eastern Christian) thought he give a more authentic explanation to them than which is commonly presented.

Students of Eastern philosophy, Christians wishing to expand their understanding of Christian belief and practice, those with an esoteric outlook, and anyone seeking how to live out the teachings of Jesus will find this book of immense benefit.

• "The book is written to read easily and flows so well in a light, contemporary voice. Burke draws upon both Christian and Hindu teachings in his beautifully executed explanations of each verse in 'The Gospel of Thomas.'" — Cheryl Bruedigam