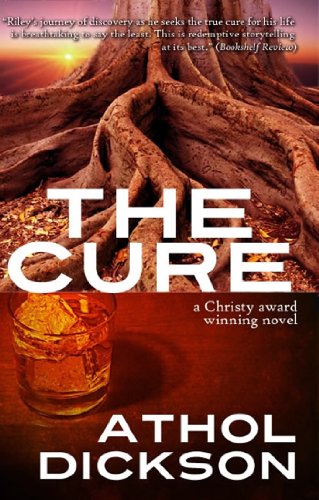 Book: The Cure by Athol Dickson

about this book: Riley Keep, former missionary, now a drunk, is begging on the streets and desperate to forget a past he lost in one far-flung act of wickedness. Then he hears the rumors. Miracles are happening in the picture postcard village of Dublin, Maine.

Riley isn't the only Pilgrim searching for deliverance. There's the old woman fleeing a horrific monster, the lonely wife tempted by forbidden desire, the impoverished lobsterman lured by tainted wealth, the young girl weighing life and death decisions, and the small town cop with a murder on his hands. But only Riley keep will learn if it's true what people say: sometimes The Cure is much worse than the disease.

Most religions claim we can live moral lives if we so choose. But if that were true wouldn't somebody, somewhere, choose the right thing every time? "Nobody's perfect" is true the same way "what goes up must come down" is true. Like gravity, and like the urge behind Riley Keep's alcoholism, when it comes to morality there are forces at work beyond our control. Nobody chooses goodness all the time, because nobody can.

Much as a drug-addicted mother will give birth to a baby addicted to those same drugs, we are all born addicted to bad choices. Take two toddlers and put one desirable toy between them. Will you see a demonstration of selfless generosity? Will one of them offer the toy to the other? Not likely. Innocent though we'd like to think they are, the bigger, faster toddler will end up with the toy and the other one will throw a fit, as every parent knows.