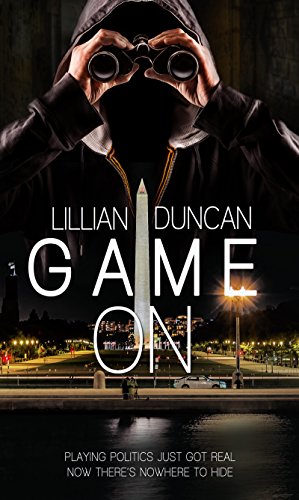 Book: Game On by Lillian Duncan

about this book: Who says Christian novels are too slow-moving and sweet? Not me! Game On is a best selling political thriller that you'll find hard to put down.

What would you do if someone was out to get you, but you didn't know who it was or why? That's the question that faces Lucas McMann in GAME ON.

He believes he's the victim of an elaborate and bizarre stalking game. The goal being to ruin his political career. The problem is he has no proof that someone is actually stalking him let alone who it is.

His choices are clear—either quit politics or win the game.

And he plans to win! But he can't do it alone and he can't go to those around him since he doesn't know who to trust. But there is someone he trusts. If only she's put their past behind her.

Private Investigator, Nikki Kent makes a living finding out other people's secrets, but she has one of her own. When Lucas shows up asking for her help, she refuses. She can't take the chance of her own secret coming to light.

But her new-found Christian faith won't let her turn her back on someone who is desperate for her help—even if he was the first man to break her heart!

Together they search for answers.

Video: Game On by Lillian Duncan