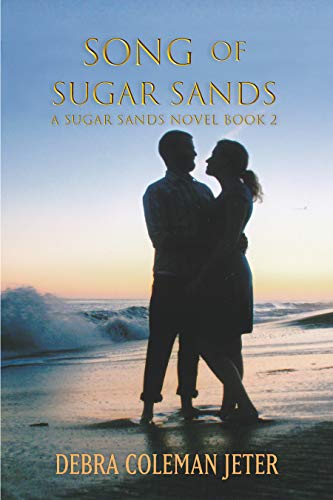 about this book: Set in the late 1970s, SONG OF SUGAR SANDS is chronologically the first novel in the Sugar Sands series. The protagonists, Peter and Acadia, appeared as minor characters in JOY AFTER NOON, which was Sugar Sands Book One (set in the early 1980s). The two novels stand alone and can be read in either sequence. I wrote SONG OF SUGAR SANDS first, but published JOY AFTER NOON first.

SONG OF SUGAR SANDS is a novel about—in the words of William Faulkner—the human heart in conflict with itself. Who hasn't, at least occasionally, struggled with doubts about her faith in God or about God's personal interest in her life? Acadia Powers' faith wavers at an early age as she observes her parents behaving in a manner she views as hypocritical. She has about given up on God when, in college, she meets and falls for Peter O'Neil, a student with a commitment to sharing his faith.

SONG OF SUGAR SANDS is the story of their romance and the first rocky year of marriage. It is a love story, but also the story of Acadia's struggle to come to terms with issues of faith. College student Acadia Powers is a late bloomer who is just learning to enjoy her newfound attractiveness to the opposite sex when she and Peter O'Neil meet at a college party. In that first meeting, Acadia discovers Peter's interest in spreading his beliefs, but believes she can cure him of what she views as an unhealthy obsession. She knows herself to be entirely the wrong sort of person to even think of marrying a would-be preacher.

Nonetheless, Peter's faith in Acadia proves almost as unshakable as his faith in God; and, after much debate, she agrees to marry him. After graduation and a simple wedding ceremony, they enjoy a brief honeymoon before moving to Sugar Sands, Alabama, where Peter has accepted his first preaching assignment, and Acadia takes a job teaching high school.

Acadia's misgivings about herself in the role of a minister's wife resurface as the challenges facing the couple begin to mount. First, one of her students attempts suicide after confiding her problems in Acadia. Then, when Beatrice Wood—the woman who has helped Acadia to survive this far—reveals that she has terminal cancer, Acadia almost quits. She must learn that her strength doesn't come from herself, or from Beatrice.

Throughout Acadia is haunted by the memory of certain things she did before meeting Peter, things she has never confided in him. Acadia's sense of identity is threatened as she first strives to be who Peter wants her to be, and later, for a time, who the church members want. As she loses sight of who God wants her to be, she questions who she is, where she's going, and whether there is hope for her or for her marriage. Eventually she begins to identify with the blind man, whose sight is restored and recorded in Mark 8. When she confesses the sins that have haunted her, with her confession comes the beginning of hope. Still her vision is clouded. Like the blind man in Mark 8, Acadia learns to see clearly in stages rather than all at once.

Praise for Sugar Sands Book One:

• Sometimes the situation seems perfect, but underneath lie secrets and time bombs ready to explode. Apart from the wonderful characterization, the quickly increasing pace of the plot, and the introspection, there are a scattering of lovely insights in the story.
— Laura Hogg, Author (A.K.A. Lara MacGregor)

• Five stars. I look forward to getting my hands on the next installment from the Sugar Sands series. I cannot wait to see what happens next.
— Amy Booksy, Blogger

• Prepare yourself for a roller coaster of emotions in this one.
— Andi's Book Reviews

• This was a thought-provoking, heart-stopping read. The family dynamics portrayed in this book were handled realistically yet respectfully … seeing how easily miscommunication can destroy a relationship.
— Sharing Links and Wisdom, Blog

• Whether you're a daughter, wife, step-mother, housewife, professional or any combination, Debra Coleman Jeter has created a character you'll embrace.
— Jane Wells, writer