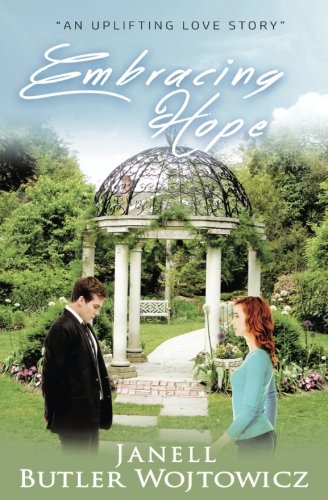 about this book: Seven months after his wife's death, university dean Drew McKinley is asking God "Why?" yet he never gets any answers. He has buried his grief—and his heart—in his career, only to find it unfulfilling. When God pushes Drew down a spiritually perilous path, he's met halfway by Allison, who understands loss; and Chris, whose family is disintegrating. Will Drew finish his journey to embrace the hope God offers, the love Allison shares, and the guidance Chris needs, or will he turn his back on all three with catastrophic consequences?

How It All Began
A fan of 19th century literature—especially Jane Austen and the Bronte sisters—I fell in love with Jane Eyre and Edward Rochester when I was a teenager. One evening a decade ago, I curled up and watched a brilliant BBC version of "Jane Eyre." That night, I dreamed the beginning, pivotal middle scene, and ending of what would become "Embracing Hope." The dream was so clear—and still is—that I sat down at my computer the next day and began writing feverishly.

"Embracing Hope" is not the 21st century version of "Jane Eyre," but there are subtle similarities. Allison, while not a poverty-stricken, abused and orphaned waif, has suffered tragic loss and financial upheaval. Some of Mr. Rochester's brooding qualities may be found in Drew at his lowest moments, plus both men are wealthy. But unlike the insane wife locked away in the attic of Thornfield Hall, Drew's wife is undeniably and tragically dead.

I spent a total of 16 years at a Christian college; four as a student and 12 as a public relations professional. It came as no surprise that my dream was set on a college campus. Thus, fictitious Riley University in Omaha, Nebraska, is the setting for "Embracing Hope." It didn't take much research to write the novel; just drawing on experiences and memories. Much of my writing at the college had been the "people stories" of trial, tragedy and triumph, which are reflected in "Embracing Hope."

The novel's title perfectly sums up the plot. Drew lacks hope. Allison offers hope. But first Drew must realize that hope isn't just sitting around waiting for something good to happen. It also takes action. Allison and the campus pastor help Drew take hesitant steps: mentoring, a gritty missions experience, even preaching. In the midst of their efforts, Allison's compassion reawakens Drew's heart and is jump-started with a simple embrace.

It took nine years to find a publisher for "Embracing Hope." While I never gave up the quest, the manuscript was shelved a few times as I waded through the chaos of life: jobs, job loss, job searches, freelance, moving, family obligations, health issues. It took the sudden death of my literary cheerleader and longtime friend to spur me into action to keep his memory alive. Without his encouragement "Embracing Hope" would never have been born.

Writing "Embracing Hope" was a labor of love. I never got bored writing, editing, and rewriting it. I became the characters and thrived delving into their psyches. I longed for the day when Drew and Allison would be released to the world. That day was November 14, 2016.

Yet I miss them. Dear reader, my goal is that you will become a part of Drew and Allison's lives; that you'll smile, laugh, cry, and even yell in anger with them. And in the end, my intention is that your own hope will be renewed.

• "To forgive and let God renew the heart when every fiber of the human mind and body says 'absolutely not.'"
• "This is a tale that has happened, I'm sure. The writing is that authentic."
• "This book almost left me speechless. We all need more hope ... A brilliantly written book."
• "When tragedy strikes, faith is tested, and hope emerges. Embrace it."
• "I cheered for their successes and felt myself praying with them in their struggles."

This book was excellent and very good. It is the first one that I read by this author and it had me smiling and struggling. I cried alot also. There was a lot of different things happening. A must read read for all. [by Karen C Riley]