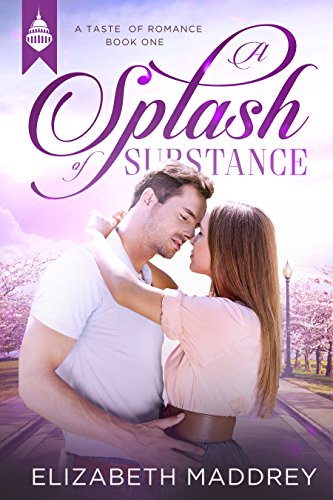 Book: A Splash of Substance (Taste of Romance Book 1) by Elizabeth Maddrey

about this book: A Splash of Substance is a sweet, contemporary Christian romance.

Jackson Trent is a Senator's aide, fiercely devoted to working in the political arena to effect change and keep government in line with the Christian values that were intended by the founding fathers. Paige Jackson is a caterer focused on living out her beliefs and convictions, with no interest in the larger political arena. But her catering company is struggling to get off the ground, so she submits a proposal to cater a fundraiser for Jackson's Senator. When her bid wins, she and Jackson are thrown together and, despite differences of opinion in how to change the culture, their chemistry is undeniable.

Paige's character came about through a conversation with friends who are strong Christians but who absolutely refuse to vote or participate in government in any way. The conversation was fascinating to me, and I started to wonder what a romance between someone like that and someone who was very political would look like. It turns out, both Paige and Jackson had a lot to learn about themselves and I'd say both ended up moderating their views and meeting somewhere in the middle.