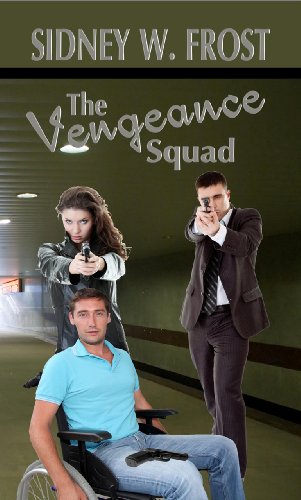 about this book: I call this my grieving book.

The idea for the book came to me one day while having coffee at an outdoor shop at a mall.

A helicopter flew over and my imagination went wild. What if the helicopter landed to rob the mall's business office? It hadn't landed, of course.

Then, I visualized a young man having coffee with his fiancé. He was a computer professor and she was a nurse. When the helicopter landed, several shots were fired. Being the man, he wanted to get her to safety. Being a nurse, she wanted to run to help if case anyone had been shot.

Being a modern man, he let her go toward the danger.

By the end of the chapter she had been killed and I, the author, didn't know what to do next. It was powerful, but too short for a book or even a short story.

Not long after I made the notes about the young couple and her death, I learned that my wife (in real life) had pancreatic cancer and wasn't expected to live. She died eight months later.

About two years after her death, I ran across my notes about the helicopter landing at the mall and I started writing "The Vengeance Squad."

The book begins the same way as I saw it before. Then, the young man decides to go after the killers. He doesn't know what he's doing but he gets help from one of his students. Tex, who happens to be an ex-con and former marine, offers to help and he recruits his friend Liz, the bookmobile librarian, to help with the research and to take advantage of her police contacts.

This motley crew called the vengeance squad gets help from an MI-6 agent and the story ends up making an international impact even though they stay in the states throughout the book.

The book has been praised for its realistic description of the character's grieving process. I changed the people and places but left in the feelings and actions.