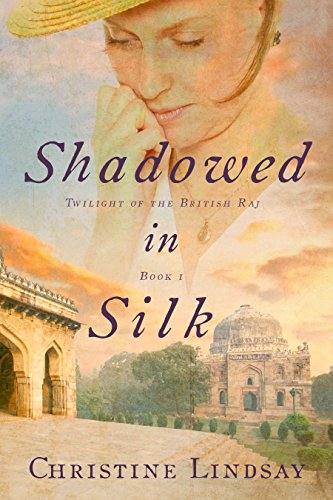 about this book: As a British immigrant, I grew up on the blockbuster epic, historical romances of MM Kaye such as FAR PAVILIONS set in Colonial India--a time of swashbuckling action, suspense, everlasting love, and in exotic settings.

So I had to write my own books in the same setting but from a Christian viewpoint. I must have done something right, SHADOWED IN SILK, Book 1 of my series Twilight of the British Raj has won 2 awards, been a finalist in a third, and was recently nominated for a forth award.

When I sit down to read a novel, I want a nice big thick one that's going to take me away for a while, and to a place that is totally different from my day-to-day life. However, I like the characters to experience the same emotions that I experience. I also like a book that has a bit of everything in it---history, suspense, action, gut-wrenching emotion, reality, and a big, big love story.

So in SHADOWED IN SILK, you will find a wife caught in a marriage fraught with domestic violence, a British Cavalry hero suffering from shell shock from the Great War, a Russian spy stirring up a rebellion in northern India, Gandhi, a Christian mission run by former child Hindu widows, a 3-year-old boy, and a black cavalry stallion called Samson.