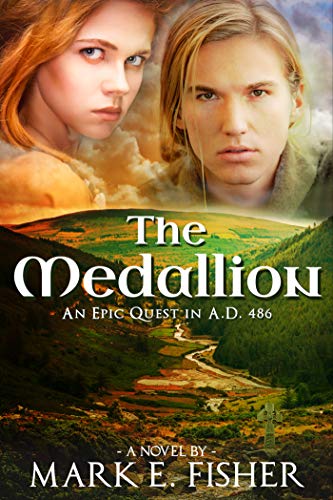 about this book: Something Is Pulling Ty Toward Gaul

The Medallion begins in A.D. 486 in ancient, Celtic Ireland. A powerful feeling pulls Ty to leave his father and head toward the barbarian-ruled lands of Gaul to search for a sister everyone says fell off the cliffs and died. But Ty isn't so sure. He consults with a refugee from justice living with the monks who insists God is telling him to go. At the same time, Ty's father, Taran, receives a message from Inis Creig, their island home. Druids have again taken control of the clan, and now Taran is convinced that only Ty can save their people. But he won't tell Ty until they're on board ship and heading for home.

But on the eve of Ty's and his father's departure for home, Ty leaves his father in the dead of night. He meets his new friend, Prince Cairell. Together they flee toward the coast. Against her brother's wishes, Cairell's mysterious sister, Sorca, decides to join them. Ty has always been attracted to her, but he just doesn't understand her. Soon Prince Eochaid, a follower of the druids, pursues. His goal? To kill his siblings, secure his inheritance to the throne, and sacrifice Ty to his druidic gods.

Thus begins a medieval, Celtic adventure that takes the group across the sea to the wild lands of Gaul, where Clovis is driving out the Romans, and where evil Prince Gundobad has designs on his brother's Burgundy kingdom. As Ty and his friends are drawn into these events, Ty's father returns, alone, to Inis Creig. There, on his island home, the druids have turned his people away from the truth of Christ and returned them to the worship of the ancient Celtic gods and to human sacrifice. Only much later does Ty discover the message his father received, warning about the disaster his clan is facing.

The Medallion is for anyone with an interest medieval, Celtic Ireland around the time of St. Patrick. It is high adventure, written from a Christian worldview. The author spent about a year writing this book, with another six months in editing. Although it's the sequel to The Bonfires of Beltane, the author's first book of Christian historical fiction, it can be read as a stand-alone book.